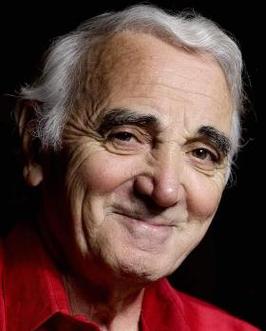 He may be 87, but don't suggest to French crooner and veritable national monument Charles Aznavour that his forthcoming tour is a goodbye. "I have never, ever used the word farewell," he quickly points out.

The legendary singer-songwriter pleased fans the world over when he announced plans for a month-long residency at Paris' landmark Olympia theatre starting September 7, followed by a nationwide tour.

Aznavour's stint in the capital is a return to the stage that launched his career 55 years ago. Close to 1,000 songs and some 60 films later, there is -- once again -- speculation that he may choose the moment to announce his retirement.

"Some of the press say anything!" he told Agence France Presse. "I said that I was going to do one of my last tours. But when (US director) Martin Scorsese presents his latest film, you don't say he's not going to make another."

The performer of such hits as "She", rerecorded by Elvis Costello for the Julia Roberts-Hugh Grant comedy "Notting Hill", and "Yesterday When I Was Young" said he is embarking on his new tour without first-night nerves -- but a bit of anxiety.

"I used to get nervous, at the start, when the audience hadn't come to see me but from the moment they did, it stopped," he said.

Anxiety, on the other hand, "it's about the set, the songs. Was I right to do this tour? Should I have stopped before?" he said.

Born in Paris in 1924 to Armenian origin parents, Aznavour -- originally Aznavourian -- grew up in the city's poorer neighborhoods before finding a home on the stage.

Starting out in cabaret, he later teamed up with young songwriter and composer Pierre Roche and the iconic Edith Piaf, who would take him to America and a solo career.

In 1954 he rose to prominence with his live renditions of "Sur Ma Vie", followed by one of his biggest hits "Je m'voyais deja" in 1960 -- the same year he starred on screen in Francois Truffaut's "Shoot the Piano Player", which catapulted him to fame abroad.

A couple of years later he took New York's Carnegie Hall by storm before touring the world and seeing his songs sung by stars from Ray Charles ("La Mamma") to Liza Minnelli and Fred Astaire.

Aznavour -- sometimes referred to as the French Frank Sinatra -- is not only one of France's most popular singers but the first French performer to have a recording that went platinum in Europe. He has sold more than 100 million records worldwide.

In 1998 he was named Entertainer of the Century by CNN and Time Online.

The octogenarian is aware he may not be able to carry off performances as he once did, and may have to make concessions to his years.

"That doesn't mean I'm helpless, but you have to know your age.

"My memory is getting worse and worse, so I'm just going to tell the audience the truth: I will probably have an autocue at some point," the singer said.

"I don't complicate things, because the audience isn't complicated. I have told them everything until now, including when I had a hair transplant," he laughed.

Ahead of the tour, Aznavour is publishing "From One Door to Another", a collection of thoughts and memories, and "Always", a new album of original songs.

From a generation of French "chanson" masters where lyrics are king and the tune a prop, the album is pure Aznavour with story-songs on the passing of time, on war, love and desire.

"I'm often asked if I am thinking about a woman as I write," he said. "No, I think about the beauty of the words first then the subject follows by itself."

"I owe everything to French literature, I'm a voracious reader, I buy an enormous number of books, and beautiful books, because I like it when my hands are able to touch something as beautiful as my eyes can see," said Aznavour.

His current reading list features the latest offering by French-Afghan author Atiq Rahimi, some Turkish literature, and "a spot of the Bible and the Koran..."

For his Olympia shows and the 20 dates that follow he has selected "some new songs, some old, some very old, and some all-time favorites."

The new? "Well, I have a new musician who plays the duduk," he said, referring to a flute-like traditional woodwind instrument from Armenia, where Aznavour set up an aid foundation and was granted citizenship in 2008 by presidential decree.

"So I am going to sing a song that I recorded with a duduk but that I have never been able to play on stage," he adds enthusiastically.

"I'm like every other artist, I like doing things that nobody else does: performing at the Hollywood Bowl in Los Angeles, at the Kremlin, St Mark's Square in Venice... I get a real kick out of that," he said.

"At my age, I'm not stopping anyone else from doing it. Just the opposite, I think am paving the way."

God bless you.You' ve enchanted so many of us. There are very few singing poets like you left today...Singers who can touch to the real meaning of life and human experience.