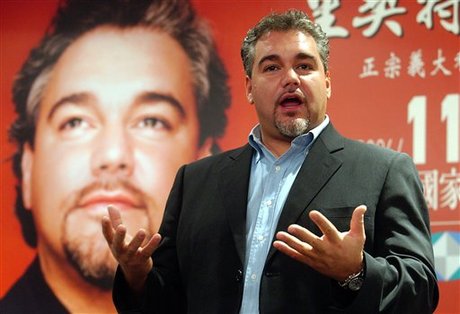 Salvatore Licitra, a tenor known in his Italian homeland as the "new Pavarotti" for his potent voice and considerable stamina, died Monday at age 43 after spending nine days in a coma following a motorscooter accident in Sicily.

Catania's Garibaldi Hospital, announcing the death, said Licitra never regained consciousness after suffering severe head and chest injuries in the Aug. 27 accident. Doctors had said Licitra crashed his scooter into a wall near the town of Ragusa, apparently after suffering an interruption of blood to the brain while driving.

The hospital said Licitra's family agreed to make his organs available for transplant.

"So very sad to say goodbye to Salvatore Licitra. I will miss you," soprano Deborah Voigt, a frequent onstage partner, wrote on her Facebook page.

In separate comments emailed to The Associated Press, Voigt wrote: "This is just heartbreaking. Salvatore was a great singer, but he was also just a really lovely guy. Always ready for a laugh, always light in spirit."

The singer recalled that Licitra was her "first Dick Johnson," referring to the tenor role in Puccini's "La Fanciulla del West" at the San Francisco Opera in 2010. Voigt sang the role of Minnie in the opera, and she reminisced how Licitra had "held my hand every moment as I stumbled along slaughtering his language!"

"His passing in the fullness of his career hurts," the La Scala opera house wrote in its own announcement of the tenor's death.

La Scala noted that Licitra debuted in the famed Milan venue in the 1998-1999 season, with maestro Riccardo Muti conducting him in Verdi's "La Forza del Destino."

But it was on the stage of Metropolitan Opera in New York, that Licitra, the Swiss-born son of Sicilian parents, grabbed the world's attention. He subbed for mega-tenor Luciano Pavarotti in a gala performance in 2002 of Puccini's "Tosca," wowing the audience and winning long ovations for his two big arias. The audience's response brought tears to his eyes.

Peter Gelb, the Metropolitan Opera's general manager, hailed Licitra as "one of the greatest natural tenor talents of his generation. His premature death is tragic for his family, friends and loved ones, and his legions of admirers around the world, which include his many fans at the Met."

La Scala praised Licitra as a "dramatic tenor, with strength."

"Licitra represented the school and tradition of Italian song, in his natural relationships to words," the Milan opera house said. "A decade of his personal history was interwoven with our theater."

He had traveled to the Ragusa area in late summer ahead of a September ceremony to receive a local music prize. Licitra's web site, which carried the news of his death, still listed upcoming engagements, including an appearance later this month in Tokyo.