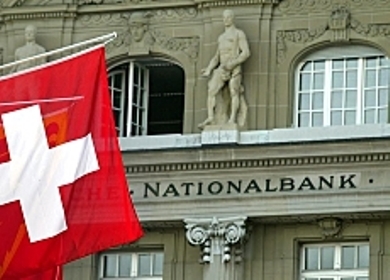 The Swiss National Bank on Tuesday decided to fix the country's exchange rate at 1.20 francs per euro and indicated it would buy an unlimited amount of euros regardless of the risk to maintain that value.

The central bank is exercising what many analysts in recent weeks had called the last-ditch "nuclear option" to shield the Swiss economy and exporters from the damaging impact of a strong franc.

"The current massive overvaluation of the Swiss franc poses an acute threat to the Swiss and carries the risk of a deflationary development," the bank said in a statement that announced the goal of "a substantial and sustained weakening of the Swiss franc."

The euro, which had been trading around 1.10 francs before the announcement, shot up to 1.2024 afterward.

The SNB said it would immediately "no longer tolerate" an exchange rate below the minimum of 1.20 francs per euro and would "enforce this minimum rate with the utmost determination and is prepared to buy foreign currency in unlimited quantities."

But it said even the rate of 1.20 francs per euro was too strong for the franc and "should continue to weaken over time." It said it was prepared to take further measures to make that happen.

International traders put their money into Swiss money accounts, causing the franc to jump in value, when global stock markets are volatile, as they have been lately. The Swiss economy also has been faring better than most other nations in debt-saddled Europe, where the the financial sector and governments are being forced to cut spending.

Jennifer McKeown, a European economist at London-based Capital Economics, called the decision "a bold move" even though 1.20 francs per euro is still relatively strong for the Swiss currency.

"With exports clearly at risk of slumping, the bank must have felt that it had no other choice," she said in a note to investors.

Sales of the nation's vaunted cheese, chocolate and other iconic products have dropped markedly in recent months due to the strength of the Swiss franc.

The Swiss economy has managed to grow at a healthy 2.4 percent rate, and exports were up 3 percent in the latest figures, for July. But the Swiss government says that because of the soaring franc it expects a slowdown in growth to 2.1 percent for 2011, and to 1.5 percent in 2012.

The European Central Bank's governing council issued a terse statement immediately after the announcement indicating they had no role in the Swiss currency move.

"The governing council takes note of this decision, which has been taken by the Swiss National Bank under its own responsibility," the ECB said.