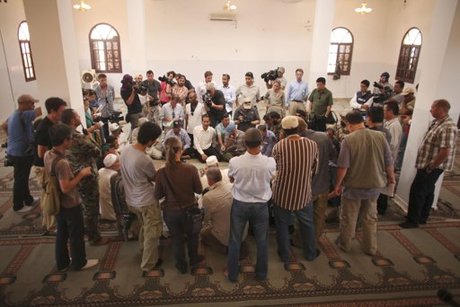 Libya's new authorities resumed talks on Tuesday with local leaders in Bani Walid, one of the last bastions of Moammar Gadhafi, bidding to end a tense standoff over the oasis town.

Negotiations for the peaceful surrender of Bani Walid, which anti-Gadhafi fighters encircled last week, had collapsed Sunday, and the latest talks were aimed at reassuring Warfalla tribesmen, elders and the local community.

"No-one will be mistreated; We shall not attack property and we shall not assault anyone," Mahmoud Jibril, the number two in the National Transitional Council, told the meeting in a telephone call from Benghazi.

"God willing the negotiations will be successful," he said, calling the talks "a historic opportunity for Bani Walid and the Warfalla tribe" that dominates the region.

Representatives of Bani Walid urged Libya's new leaders to declare a general amnesty, saying the meeting at a mosque on the outskirts of the besieged town had cleared the suspicions of its people.

He admitted however that there were "obstacles and doubts" within the community as a result of six months of regime propaganda and media interference.

"Bani Walid has reached the stage where they realize the previous system is over. Bani Walid is with Libya, it is not an exception," said the sheikh.

Another local leader, Miftah al-Bagul, voiced similar concerns and stressed the key to the anti-Gadhafi forces winning over the population was entering the town peacefully and quickly restoring basic services.

"We are here to stop divisions and to avoid bloodshed ... We do not want 20 rebels to die, nor one hundred civilians," said Bagul.

"The behavior of the rebels is important ... The issue of services is very important. If after two or three days after the rebels enter Bani Walid they bring services, their image will change."

Representatives of Libya's new leadership assured the elders they would be safe at home, there would be no revenge and that those with blood on their hands would be tried under existing laws rather than by military or special courts.

"We want to live by the law too," said another elder, adding that most of Bani Walid's people want peace, although small armed pockets wanted to fight as a result of the Gadhafi regime's propaganda.

The tone of the meetings was cordial and respectful throughout, with both parties committing to the shared goal of avoiding further bloodshed and seeking to establish trust.

The NTC's chief negotiator, Abdullah Kenshil, expressed optimism about the progress of the talks which started and ended with prayers and salvos of celebratory gunfire.

"The result of these talks is that our colleagues from Bani Walid met us and were reassured that we do not mean them harm and we will preserve their lives," he said.

Kenshil said at the weekend that the pro-Gadhafi forces in Bani Walid numbered between 30 and 50 men, "very well-armed, with machine-guns and rocket-launchers and snipers."

Anti-Gadhafi fighters have moved to within 15 to 20 kilometers of the oasis town with a view to launching an assault if the talks broke down.

"If we find any resistance we think it will not be from the people of Bani Walid but from remnants of the regime," said fighter Abdullah Abu Asarah.