Poland Football Scare Was a Wake-Up Call for Germany 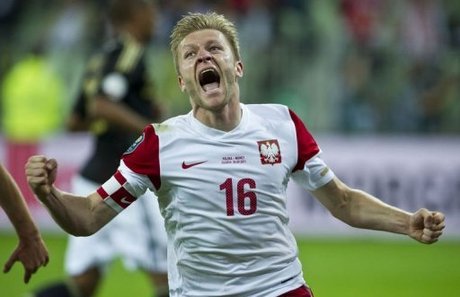 Coach Joachim Loew said Germany's last-minute 2-2 friendly draw with Poland has given his players a wake-up call as defensive problems loomed again, while the hosts were left to rue the win that got away.

A 94th-minute goal from Brazil-born striker Cacau spared Germany's blushes in Gdansk on Tuesday and denied Poland a historic first win over the Germans at the 17th attempt after the hosts took a dramatic 2-1 lead in the 91st minute.

"In the locker room, there was more sorrow than joy," admitted Poland coach Franciszek Smuda.

"But at the end of the day, we have still achieved a draw with the third best team in the world.

"It hurts to concede a goal in the final seconds of the match."

Poland have never beaten Germany in 17 matches over 78 years and this was the first time in 31 years they even managed to score against the Germans.

Poland captain Jakub Blaszczykowski - who plays for German champions Dortmund - said his team were punished for failing to concentrate until the very end.

"We were so close to victory," he said after scoring Poland's second goal from the penalty spot.

"We fell asleep at the end and the victory escaped our grasp. We were about to go down in history, but we missed out."

Loew fielded an experimental midfield, which so nearly back-fired, and the defense struggled, just as it did last Friday in the 6-2 win over Austria which confirmed Germany's Euro 2012 berth.

Although the German attack enjoyed a field day against the Austrians, both Austria and Euro 2012 co-hosts Poland found space to exploit in the Germany defence, but Loew said the scare would serve his team in the long-run.

"I am thankful that we don't play every game like we did against Austria, because I think it is good when we have difficulties, like against Poland," he said.

"That is good for a young side because then we will be prepared for anything like this during a tournament.

"It is good that we came from behind twice, because this is a learning curve.

"Now we must learn a few more things because we are still making small mistakes."

After Germany hammered both England and Argentina to finish third at last year's World Cup in South Africa, Loew says he has noticed how hard teams are now working to beat his side.

"We have seen that Germany is now being hunted again after our last few good results," he said.

"Poland had enormous supports from their fans and the team was very dedicated, but we also have to learn to break down such resistance.

"It is clear things won't always go as smoothly as they did against Austria."

Captain Philipp Lahm was the only defender to play consistently well against Poland.

Centre-backs Per Mertesacker and Jerome Boateng failed to gel, while Christian Traesch was overwhelmed at right-back, but Loew dismissed claims the defense is still a work in progress.

"During Euro 2012 qualification, we have conceded the fewest goals (five) which speaks for our defense," he said.

"And the first goal we conceded against Poland, I don't blame on the defense, the mistake came from elsewhere.

"We made one or two mistakes, but basically, I am not worried."