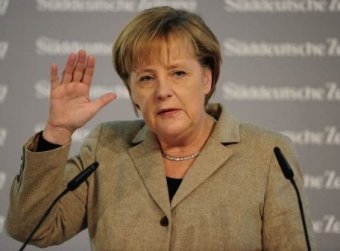 German Chancellor Angela Merkel Tuesday sought to ease fears over a possible Greek bankruptcy, saying the 17-country eurozone had to stick together and that an "uncontrolled insolvency" must be avoided.

"The top priority is to avoid an uncontrolled insolvency, because that would not just affect Greece, and the danger that it hits everyone -- or at least several countries -- is very big," Merkel told German radio station RBB.

She stressed that the eurozone had to remain intact, hinting that if Greece were to leave the group, others would swiftly follow.

"I have made my position very clear that everything must be done to keep the eurozone together politically. Because we would soon have a domino effect," said the chancellor.

Merkel also had encouraging words for debt-wracked Greece, which is trying to persuade an international team, known as the "troika", that it is getting its public finances back on track, a prerequisite for more aid.

"Everything I hear from Greece is that the Greek government has hopefully seen the writing on the wall and is now doing some of the things that are required," she said.

And in a bid to calm markets, which went into free fall Monday after comments from German policymakers that an orderly insolvency for Greece or even a eurozone exit was possible, she urged politicians to choose their words cautiously.

"Everyone should weigh their words very carefully. What we do not need is volatility on the financial markets. The uncertainties are already big enough," said Merkel.