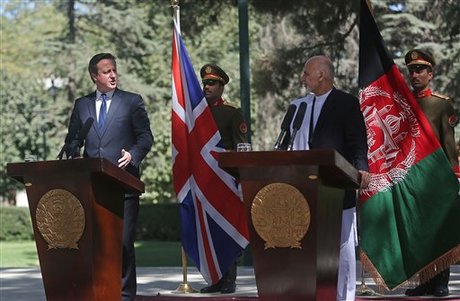 Newly-inaugurated Afghan President Ashraf Ghani on Friday set a fresh tone in relations with NATO countries that have fought against Taliban insurgents, paying a fulsome tribute to foreign soldiers who died in battle.

Hamid Karzai, who left office on Monday, caused outrage in the United States , Britain and among other allies by saying the NATO mission in Afghanistan since 2001 caused huge suffering to Afghans and failed to bring security.

But Ghani, speaking alongside British Prime Minister David Cameron in Kabul, said the NATO soldiers in Afghanistan had made the world a safer place.

"I want to say thank you to those families for the loss of their loved ones," Ghani said.

"They stood shoulder-to-shoulder (with Afghan forces) and we will remember them.

"Your presence here has meant London has been safe as well as the rest of the world."

Ghani has already begun to reset ties with the US and NATO military by signing a long-delayed agreement allowing about 12,000 foreign troops to stay on into 2015 to further train the Afghan army and police.

The deal -- signed on Ghani's first day in power -- was a major cause of friction between Washington and Karzai, who eventually refused to sign it despite heavy international and domestic pressure.

"Let me thank every soldier and civilian who was injured in Afghanistan and have left pieces of their bodies here," Ghani said.

"(They) have memories, some of them haunting memories, but I hope they will also remember the good heart of the Afghans."