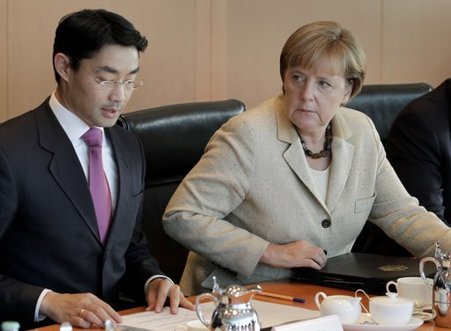 Chancellor Angela Merkel's center-right coalition is squabbling so much over the eurozone debt crisis that even the opposition is urging her to quash the infighting — raising new questions about whether the government might collapse before its term ends.

A new poll underlined the government's woes, showing support for the main opposition party at its highest in 3 1/2 years and dismal ratings for Merkel's junior coalition partner, the Free Democratic Party.

Merkel's coalition took power in 2009. It has become notorious for infighting — particularly over the Free Democrats' demands for tax cuts, which hit resistance from Merkel's conservatives and helped push down the party's support.

The coalition has also performed badly in several state elections this year, and the Free Democrats are struggling to avoid being ejected from a fifth regional legislature in Berlin this weekend.

That appears to have prompted a new outbreak of hard-line rhetoric on the European debt crisis by the pro-business Free Democrats.

This week, the Free Democrats leader, Vice Chancellor Philipp Roesler, talked openly about the possibility of an "orderly insolvency" for Greece — a first for a government minister. The comments unsettled already jittery markets and prompted a clearly annoyed Merkel to dismiss the idea and demand that "everyone should weigh their words very carefully."

Roesler and his party were undeterred. The vice chancellor shot back there could be "no bans on thinking."

Germany's next national election isn't due until 2013, but the ferocity of the clash prompted new media and opposition speculation that a vote might come earlier.

Roesler drew sharp criticism from the opposition, which has advocated introducing eurobonds, bonds jointly backed by all the eurozone's 17 nations. The Free Democrats are portraying their party as a bulwark against eurobonds, which Merkel also opposes, but which some commentators have suggested as one way to resolve Greece's borrowing problems.

"The chancellor must now make clear who is in charge," Cem Ozdemir, a leader of the opposition Greens, told reporters Wednesday.

"Ms. Merkel must now say whether she thinks she can govern in a stable and reliable way with this government until 2013," Ozdemir said. "If not, then she should end it sooner rather than later and give voters a chance to decide who governs this country."

"(Roesler) pushed down share prices, he further isolated Germany in Europe, and for just one reason — to secure the survival of the FDP," Carsten Schneider, a prominent lawmaker with the Social Democrats, Germany's biggest opposition party, told n-tv television.

"That is irresponsible and completely unprofessional," Schneider said. "If he were an employee in a company, he would have to be fired."

Roesler became party leader in May — replacing Foreign Minister Guido Westerwelle, whose star has fallen since the Free Democrats garnered 14.6 percent in 2009 federal elections. Roesler promised to "deliver" on the party's pledges — but so far, he has secured only a vague commitment to future tax relief.

While Roesler has taken most of the criticism this week, the Christian Social Union — the Bavaria-only sister to Merkel's conservative party — also has been talking tough on the euro. Leader Horst Seehofer said countries that flout budget rules and endanger the eurozone "must reckon with having to leave the currency union."

However, there is no formal mechanism for a country to leave the currency shared by 17 European nations and experts predict an enormously disruptive financial shock if any were to try.

Merkel's spokesman, Steffen Seibert, insisted Wednesday that the government was united in its aims in the European debt crisis. And, asked whether Merkel sees any grounds for speculation about an end to the coalition, he replied: "No."

Center-right voters are finding it difficult to swallow more bailout talk ahead of a Sept. 29 parliamentary vote on expanding the eurozone rescue fund — another factor undermining the coalition's support. Other divisive issues include an abrupt decision to speed up Germany's exit from nuclear power and the government's general impression of drift.

A poll by the Forsa agency for Stern magazine showed support for the Social Democrats up two points from a week earlier to 29 percent — their highest level since February 2008.

The Greens, their traditional allies, were steady at 19 percent. That would be enough to give the two parties a parliamentary majority. The third opposition party, the hard-left Left Party, polled 9 percent.

Support for Merkel's Union bloc was down a point at 31 percent — a little below where it was in Germany's 2009 election. The FDP was stuck at just 4 percent, not enough to win seats in the national parliament.