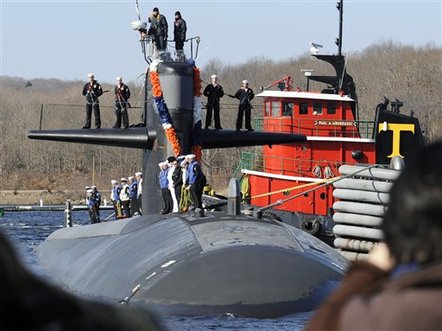 A French investigating judge has charged a Lebanese businessman suspected of a role in a bribery scandal surrounding the 1994 sale of French submarines to Pakistan that may have been linked to an attack that killed 15.

Ziad Takieddine said he was satisfied with the judicial action since it gives him access to the investigators' file.

Civil parties' lawyer Olivier Morice said that preliminary charges of complicity and receiving misappropriated funds were filed against Takieddine. Preliminary charges allow investigators to determine whether the case should proceed.

A May 2002 attack in Karachi killed 11 French naval construction workers and four others. Judicial officials are studying whether the attack was linked to a cutting off of French bribes for armaments contracts.

he must be related to jabal amel

the picture shows an American Submarine...
Anna and Marie why focusing on his religion? Does it make any change?
I hope you both don't believe in the biggest lie called "The Smart Lebanese" .Such thing doesn't exist!! What does exist is corruption, fraud, deceive and easy money....
Christian or Muslim they are the same they are active worldwide....
Pffffffffffffffff