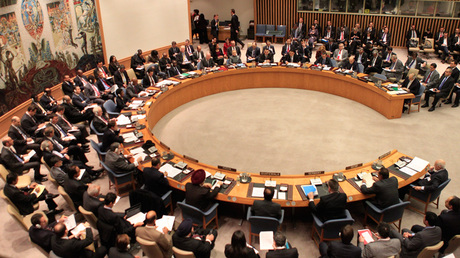 Angola, Malaysia, New Zealand, Spain and Venezuela won coveted seats at the U.N. Security Council on Thursday, but Turkey suffered a humbling defeat in its bid to join the world's "top table."

The five countries garnered the required two-thirds support from the 193 countries of the U.N. General Assembly during three rounds of voting that ended with Turkey picking up only 60 votes.

Turkey had been competing against New Zealand and Spain for two seats and had dispatched Foreign Minister Mevlut Cavusoglu on a high-profile mission to New York this week to lobby for votes.

Angola, Malaysia and Venezuela were virtually assured to win election as their candidacies had been put forward by their region and they ran unopposed on their slates.

After New Zealand's resounding victory in the first ballot, Foreign Minister Murray McCully called the outcome a "strong vote of confidence" in his country, capping a 10-year campaign for the ultimate diplomatic prize.

"To receive the success that we have had this morning means a lot to us and we will work very hard to make sure we give good service on the council," McCully told reporters at U.N. headquarters.

Venezuela won 181 votes despite criticism from rights groups and the United States over its support for Iran, Syria and other hardline regimes that are at loggerheads with the West.

Venezuela's President Nicolas Maduro called the vote "a victory, a world record of support, love and confidence. One hundred eight-one countries have said here we are, we support you."

"We should feel happiness and joy in our hearts that Venezuela is beloved country in the world," he added, speaking in Caracas.

"To those birds of ill omen who say Venezuela is isolated in the world -- who is isolated? The country that received 181 votes?"

"Unfortunately, Venezuela's conduct at the UN has run counter to the spirit of the U.N. Charter and its violations of human rights at home are at odds with the Charter's letter," she said.

Rights groups have pointed to Venezuela's record on the U.N. Human Rights Council as a cause for worry and diplomats have also expressed concern about its stance on the war in Syria.

Over the three rounds of voting, Turkey saw its support dwindle from 109 votes to 73 and finally 60, surprising many who saw the regional player as a strong contender.

The elections came at a busy time for the council, which is grappling with crises on many fronts, from the jihadist offensive in Iraq and Syria, to the Ebola outbreak in West Africa.

Russia's actions in eastern Ukraine, conflicts in Syria, South Sudan and Central African Republic and the faltering Israeli-Palestinian peace process are also at the top of the council's agenda.

The five elected countries to the 15-member council will join the five permanent powers -- Britain, China, France, Russia and the United States -- for a two-year term.

Five other countries elected last year are mid-way into their term. These are Chad, Chile, Jordan, Lithuania and Nigeria.

As the most powerful body of the United Nations, the Security Council can impose sanctions on countries and individuals, refer suspects for war crimes prosecution, endorse peace accords and authorize the use of force.

It also oversees 16 peacekeeping missions in the world, with a budget of close to $8 billion.

The five elected countries will replace Argentina, Australia, Luxembourg, Rwanda and South Korea, and begin their stint on January 1.