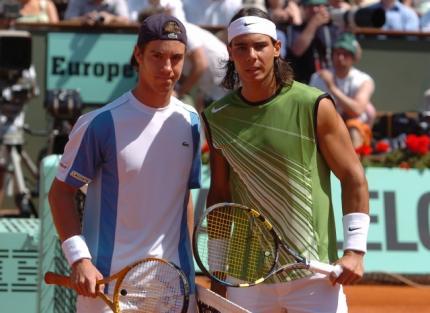 Rafael Nadal cast off fatigue and his U.S. Open final loss to Novak Djokovic to thrash Richard Gasquet in Friday's opening rubber of the Davis Cup semi-final to hand the hosts and four-time champions a 1-0 lead.

World number two Nadal blitzed Gasquet 6-3, 6-0, 6-1 to underline the Spaniards' status of favorites on home clay as they look to advance to a final against either defending champions Serbia or Argentina, who were facing off in Belgrade.

Nadal had admitted to tiredness after his U.S. Open final defeat but said that "if I come, it is above all to defend my country."

But he gave Gasquet no chance in 30 degrees Celsius heat, breaking the Frenchman at the first time of asking and never giving his rival the hint of a chance before an enthusiastic 10,000 crowd.

"I couldn't find a way past him. It's a defeat that hurts," added the French player after his tenth loss in as many meetings with the Spaniard.

"That worked out well, I managed to play with a cool head and do what I had to do throughout without losing concentration for a minute," said Nadal after his ruthless exhibition.

"Luckily everything worked out fine and we are 1-0 ahead, which is important," added the Mallorcan.

Nadal admitted that physically he had begun feeling he was close to his limits - but he said that Gasquet had not helped his own cause.

"There were moments where he helped me in making mistakes, not forcing me to play long points," Nadal explained.

"My service was working well and that made me feel much more comfortable," he added.

With two top five ranked players in Nadal and David Ferrer, Spain are bidding to reach the final for the third time in four years in Cordoba's bullring.

France, runners-up last year, were hoping to follow on from their 5-0 whitewash over their hosts in last year's World Group quarter-finals but now have a tough challenge ahead after their poor start which saw Nadal take his career series with 15th-ranked Gasquet to 10-0.

Having dropped serve to give Nadal the opening set on the two-time champion's third set point, Gasquet managed thereafter to win just one more game as the Spaniard tore past him in 2hr 06min, helped by a 100 percent return on first serve points won in the second set while he was equally dominant in the third set.