Abbas: We Want to Delegitimize Occupation, Not Israel 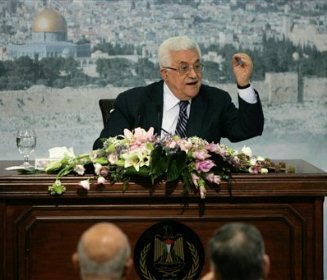 Palestinian President Mahmoud Abbas vowed Friday to lodge a bid for U.N. membership before the Security Council in one week, despite mounting Israeli and U.S. opposition.

"We are going to the Security Council," he said in a televised address to the Palestinian people from his Ramallah headquarters.

"When I have finished delivering my speech (to the General Assembly), I will submit the request for membership to the Secretary General to be passed to the president of the Security Council," he said.

But Abbas acknowledged that his U.N. move would not end the Israeli occupation and cautioned against outsize hopes.

"We don't want to raise expectations by saying we are going to come back with full independence," Abbas noted.

Abbas urged the Palestinian people to refrain from violence, saying "anything other than peaceful moves will harm us and sabotage our endeavors."

And he asserted twice that his aim was not to isolate or delegitimize Israel — a charge Israel often levels at the Palestinians and their supporters.

"It is our legitimate right to demand the full membership of the state of Palestine in the U.N.," he said, "to put an end to a historical injustice by attaining liberty and independence, like the other peoples of the earth, in a Palestinian state on the borders of June 4, 1967."

He was referring to the lines that existed before the 1967 Six Day War, including Gaza, the West Bank and east Jerusalem.

Israel says those lines are indefensible and the borders of a future Palestinian state must be defined in bilateral negotiations.

It swiftly responded to Abbas' speech by saying the U.N. bid would not bring the Palestinians peace and slamming a reconciliation deal announced in May between Abbas' Fatah movement and the militant Islamist Hamas, which rules the Gaza Strip.

"Peace is not achieved by a unilateral approach to the U.N., and not by associating with the Hamas terror organization," said a statement from Israeli Prime Minister Benjamin Netanyahu's office.

"Peace will only be attained by direct negotiation with Israel," it added.

Hamas itself hit out at Abbas' strategy, to which it is not a party, saying that it could weaken the campaign to allow Palestinian refugees back to their former homes and delegitimize armed opposition to Israeli occupation.

"(It) carries numerous risks and could violate national rights such as the right of return, the right of resistance and self-determination," said spokesman Sami Abu Zuhri.

The United States says the basis for an agreement should be the 1967 borders but with mutually agreed amendments.

Netanyahu says he will also appear before the U.N. to explain Israel's opposition to the Palestinian bid. Like Abbas he is to speak on September 23, a government official told Agence France Presse.

Washington has threatened to veto a Palestinian membership motion at the Security Council, saying it would harm prospects for peace talks and that a Palestinian state can only result from negotiations with Israel.

"We believe strongly that the road to peace and two states living side by side does not go through New York, it goes through Jerusalem and Ramallah," U.S. Secretary of State Hillary Clinton said on Thursday.

U.N. Secretary General Ban Ki-moon called on Palestinians to return to talks with Israel and said the peace deadlock was harming the whole Middle East.

"I am asking them to enter into meaningful negotiations and the international community has a duty to create some conditions favorable to this," Ban told a news conference at the United Nations.

He said Israel's approval of permits for new settlements in the occupied territories "has not been helpful."

"At the same time, Palestinians should also try to sit together with Israeli people."

Envoys from the United States, the European Union and the Quartet have been holding talks with Palestinian and Israeli leaders in an effort to get them back into direct peace talks that stalled a year ago.

I understand that there will be a new Nobel Prize this year, for humor.
The first winner, of course, will be Abu Mazen (which means, in Arabic, "that guy").
The cash prize, five dollars, will be presented to Abu Mazen on the deck of the Turkish cruise ship Masai Moru when it docks at Hebron's Rothschild Estates and Golf Club on its maiden visit to the hot new terrorist destination.