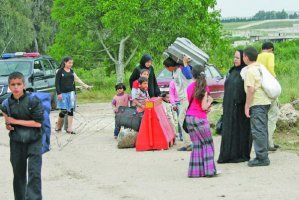 Nearly 4,000 people, who fled to Lebanon between March and September as Syrian troops crack down on anti-regime demonstrations, have registered with the United Nations, a report said.

The report by the UN Development Program released late on Friday said that more than 3,580 Syrians registered with the U.N. in north Lebanon by September 7, more than 600 of them between September 1 and 7.

"In the past two weeks, new arrivals from Syria have come to Lebanon from villages of Heet, Tal Kalakh and in Homs as clashes flared in those areas," it said.

"Most Syrians who have been displaced from their villages in recent weeks enter Lebanon at official border crossings since unofficial crossing points are reportedly heavily guarded by Syrian authorities."

Eyewitnesses in north Lebanon have told Agence France Presse they could hear gunfire from the Syrian side of the border and have seen black plumes of smoke rising in recent weeks.

Security sources have said that some refugees arrived in Lebanon suffering from gunshot wounds.

The United Nations estimates that more than 2,600 Syrians have been killed, many of them civilians, since mid-March as a result of the Syrian regime's crackdown on protests against the rule of President Bashar Assad.

This is not true! Bouthaina Shaaban announced 3269.36 refugees! Why do we always have to provide false figures.
During our 15 years of civil war, Lebanese were escaping to all neighbouring countries including Syria, now the tables are turning, strange world...