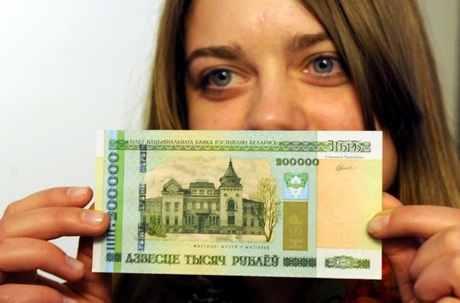 Russia's ruble slumped to a new all-time low on Friday as the economic fall-out from the Ukraine crisis and lower oil prices caused the finance minister to call for a "back-up" 2015-2017 budget.

For the first time it took more than 53 rubles to buy one euro, and the rate against the dollar topped 41.92 with speculation swirling that Standard and Poor's could cut its rating for Russia to a "speculative" level.

Russia's Finance Minister Anton Siluanov however dismissed talk of a possible downgrade as "exaggerated" as the agency was set to release its latest rating Friday, RIA Novosti news agency reported.

Russia's central bank has spent about $16 billion of foreign currency on propping up the ruble since the start of October, RIA Novosti reported, with officials admitting that they can do little more than ease its slide.

The EU and US have imposed the harshest sanctions on Moscow since the end of the Cold War over its backing for separatist rebels in east Ukraine.

The spillover from the crisis has seen the ruble tumble against both the euro and the dollar this year as major companies have been cut off from key debt markets with some $55 billion in loans set to come due in December.

Capital flight has spiraled and is set to top some $100 billion for the year according to the International Monetary Fund, while inflation is now at about 8.0 percent.

The economic turmoil has been compounded by the slump in oil prices to around $86 per barrel as Russia remains heavily reliant on energy revenues.

That level is well beneath the $100 per barrel mark, the price which Russia needs to shore up its public finances.

Siluanov stressed in an interview with Russia 24 television Friday that the 2015 budget commitments would be carried out "despite any change of the forecast."

But he said that the government may have to review its budget plans for 2015-17.

"In case external conditions remain so complicated as today then we have to have a back-up version with which obligations and expenditures we can do without," Siluanov was quoted as saying by RIA Novosti.

"The budget cannot stick to the same level of expenditure that was set in different economic realities."