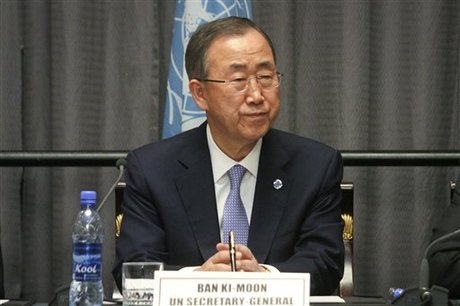 U.N. chief Ban Ki-moon warned Wednesday that Somalia risks returning to famine without urgent aid, as he visited the war-torn country three years since more than 250,000 people died of hunger.

But Ban, who was dressed in a suit and not the bullet-proof jacket he wore on his last visit during the famine in 2011, said Somalia had still made "remarkable progress" since he had last been there.

"Over three million Somalis are in need of humanitarian assistance and unfortunately that number is growing," Ban told reporters.

"I urge donors to step up contributions to avert another famine in Somalia."

The United Nations says it has just over a third of the cash it needs, having received $318 million of the $933 million it has appealed for.

"Slowly but surely, Somalia is waking from a long nightmare," Ban said, but adding he was "very concerned" about the humanitarian crisis and the shortfall in funding.

Al-Qaida-affiliated Shebab insurgents have in recent months lost swathes of territory and towns to the AU force and Somali government troops, and their leader was killed in a U.S. air strike in September, but they still remain a potent threat.

Security remains a concern in Somalia, with the government due to hold a referendum on a new constitution next year ahead of general elections in 2016.

This year, the Shebab have launched attacks in the heart of Mogadishu, including brazen commando raids on the presidential palace and parliament.

Ban, who said the Shebab's power "is declining but it is not gone", did not travel into the city itself, but remained inside the airport's concrete blast walls, manned by AU machine gunners.

The United Nations says over one million Somalis are in conditions close to famine, while over one million have fled their homes due to fighting or hunger inside the country, and another million are living as refugees in the region.

Some 218,000 children under five are acutely malnourished, a rise of seven percent since the beginning of the year, the U.N. Office for the Coordination of Humanitarian Affairs (OCHA) has warned.

Despite Shebab fighters pulling out of several towns, OCHA said in its latest report that AU and Somali "military gains are yet to translate into predictable humanitarian access".

Ban arrived hours after a shipping container stuffed with "military equipment, including explosives and uniforms" was discovered by security forces at Mogadishu's port, the presidency said, without giving further details.

The visit also comes amid fierce infighting within the Somali government.

The government, which took power in August 2012, was the first to be given global recognition since the collapse of Somalia's hardline regime in 1991, and billions in foreign aid has since been poured in.

It was hailed as offering the best chance for peace in a generation, replacing a transitional leadership mired in ineffectiveness and rampant corruption.

But political wrangles and reports of corruption have raised concern the current government, like the last administration, is blighted by infighting and failing to unite in the face of the Shebab threat.

Ban, who began a Horn of Africa trip in Ethiopia Monday, has visited Djibouti and travels onwards to Kenya, leading a delegation from six other international organisations.

get pictures of his arrival.for me