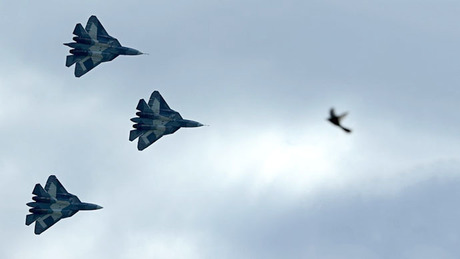 NATO said Wednesday it had tracked and intercepted four groups of Russian warplanes "conducting significant military manoeuvres" in European airspace over the past two days.

The planes, which included strategic bombers, fighters and tanker aircraft, were detected over the Baltic Sea, North Sea/Atlantic Ocean and the Black Sea on Tuesday and Wednesday, it said.

NATO allies sent up aircraft to intercept and identify the Russian planes which were continually tracked on the ground as well, it said in a report from its SHAPE military headquarters in Mons, western Belgium.

The report made no mention of the Ukraine crisis nor linked the increased activity to it.

However, Russia's intervention in Ukraine, which NATO has said constitutes the most serious threat to U.S.-Europe security since the Cold War, has sent tensions soaring.

NATO's eastern members, many of them such as Poland and the Baltic states once ruled from Moscow, have been particularly nervous and the U.S.-led alliance has put in place additional aircraft and personnel on a rotating basis to reassure them.

At a summit last month, the 28 NATO leaders agreed the alliance would have to step up its readiness levels in response.

Russia's intervention and the speed with which it was able to bring military pressure to bear on Kiev in support of pro-Moscow rebels in the east surprised many and badly rattled countries on NATO's eastern flank.

In a breakdown of the incidents, NATO said that in the early hours Wednesday, eight Russian aircraft -- four TU-95 strategic bombers, capable of carrying nuclear weapons, and four tankers -- were detected over the North Sea, flying in international airspace.

Four Norwegian F-16 fighters were sent up to intercept them.

Six of the aircraft then turned back towards Russia while two TU-95s continued over the North Sea, with British Typhoon fighters called in.

The two planes then flew down into the Atlantic, where Portuguese F-16s picked them up.

The two bombers subsequently turned around, flying west of Britain, apparently heading back to Russia, it said.

On Tuesday, another seven Russian planes flew over the Gulf of Finland and Baltic Sea where they were intercepted by German Typhoon fighters, deployed as part of NATO's support efforts for its eastern allies.

NATO said there had been more than 100 intercepts of Russian aircraft in 2014 to date, about three times more than in 2013.

"Scrambles and intercepts are standard procedure when an unknown aircraft approaches NATO airspace," it said.

Czar Puttin... After what is happening with the Turks that are "atacking" Cyprus...and the position of Turkey in Syria...Russia must be prepared for a global war...with NATO-WHaabis-Israel...the tension with Azerbejan(turks) and Armenian are increasing day by day...the Great Czar Puttin ! Lebanon...

Dude, there's is a magic tool, it's called a spell checker. It should show you that Christian is spelled "Christian"...

As of Mother Russia, it probably doesn't give a funk about takfiris. It just does the exact opposite of whatever America does. At the moment.

Saturn, he writes it that way on purpose