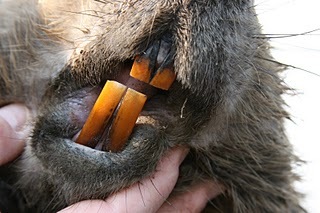 The Bureau of Land Management says a fossil found by employees on federal land represents the earliest record of living beavers in North America.

The pair of teeth was found on BLM land in northeast Oregon.

The Albany Democrat-Herald (http://bit.ly/pJMUvE ) reports the teeth come from the Rattlesnake Formation and are 7 to 7.3 million years old.

The BLM says the earliest beavers were found in Germany 10 to 12 million years ago and the animals spread across Asia, eventually crossing the Bering Land Bridge to North America.

The previous earliest known records of living beavers in North America, from about 5 million years ago, were from Nebraska, California, and northern Oregon.

The fossils will be displayed at the Thomas Condon Paleontology Center at John Day Fossil Beds National Monument.