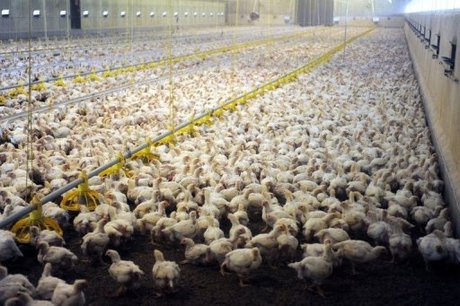 Drugs fed to animals to promote growth and prevent diseases may play a key role in the emergence of antibiotic resistant bacteria, microbiologists said.

The practice of administering large quantities of antimicrobial drugs "favors the emergence of drug resistant bacteria that can spread to humans through the consumption of contaminated food, from direct contact with animals or by environmental spread," said Awa Aidara-Kane of the World Health Organization.

"In addition, genes encoding for resistance can be transmitted from zoonotic bacteria to human pathogens," added Aidara-Kane, who leads the WHO Advisory Group on Integrated Surveillance of Antimicrobial Resistance.

She was speaking during the 51st annual Interscience Conference on Antimicrobial Agents and Chemotherapy meeting this weekend in Chicago.

In order to reduce the risk of the emergence and spread of resistant bacteria via the consumption of animal food products, the WHO suggests restricting and even eliminating the use of antibiotics to boost animal growth.

The world health body recommends limiting administering to animals the types of antibiotics considered essential to human health, such as fluoroquinolones and the most recent generations of cephalosporins.

"We are seeing a significant increase in resistance to third and fourth generation cephalosporins in Salmonella Heidelberg infections in humans," noted Beth Karp, a senior veterinary epidemiologist with the U.S. Centers for Disease Control and Prevention.

The strain is resistant to nearly all antibiotics.

Karp also expressed concern about the risk of resistance to cephalosporin antibiotics in other Salmonella serotypes.

Nontyphoidal Salmonella is the main cause of food poisoning in the United States and affects about 1.2 million people each year, including 23,000 who are hospitalized and 450 who are killed, according to the CDC.

In late May, consumer groups lodged complaints with the Food and Drug Administration denouncing the widespread use of antibiotics in animal feed and urging the agency to do more to halt the practice.

The FDA had encouraged breeders last year to administer less antibiotics in order to reduce the risk of anti microbial resistance.

J. Glenn Songer, a research professor at Iowa State University's College of Veterinary Medicine, noted certain strains of the Clostridium Difficile bacteria that cause diseases in farm animals such as young pigs play a growing role in human infection.

C. Difficile resists most treatments and is a serious threat in hospital environments.