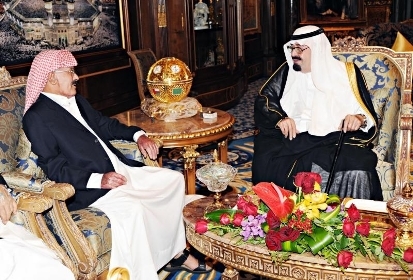 The meeting was the first since Saleh went to Saudi Arabia for treatment after being wounded in an attack on his Sanaa compound in June.

King Abdullah pledged his commitment to a "stable, secure, and unified" Yemen and hoped that the Yemeni people will overcome the crisis, the SPA news agency said without giving any further details.

Saudi Arabia is one of the authors of the Gulf Cooperation Council initiative that paves the way for a peaceful transition of power in Yemen.

Earlier Monday, the U.N. envoy to Yemen Jamal Benomar and GCC chief Abdul Latif al-Zayani arrived in Sanaa for the signing of a U.N. roadmap for implementing the Gulf plan.

Monday's meeting came amidst one of the bloodiest days since anti-government protests calling for Saleh's resignation began in January.

Nearly fifty people have been killed since Sunday evening, the majority of them in the capital Sanaa as government troops and security forces opened fire on unarmed protesters.

The attacks on protesters were followed by armed clashes between Yemeni security forces and dissident troops who have defected in support of the nation-wide protests.