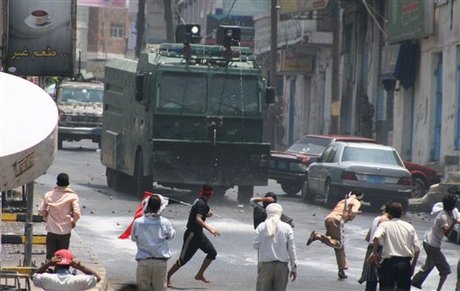 Gunfire and shelling rocked Sanaa early Tuesday as rival military forces battled each other on a third straight day of violence in the Yemeni capital in which 53 people have been killed, residents said.

After a lull in fighting that lasted only a few hours in the night, Sanaa residents awoke at dawn to the sound of automatic gunfire and shelling, with witnesses saying troops of dissident General Ali Mohsen al-Ahmar were clashing with those loyal to embattled President Ali Abdullah Saleh.

There was no immediate word on casualties.

The source of the shelling was not immediately clear but some residents said it was coming from Hada district in Sanaa's south where troops from the elite Republican Guard units, commanded by Saleh's son Ahmed, are deployed.

In the firing line, according to witnesses, are posts held by Ahmar's troops around Sanaa's Change Square, where they are guarding thousands of anti-regime protesters who have been camping out for months and who since Sunday have come under violent attack by Yemen's security forces.

On Monday, Yemeni forces killed at least 27 people in clashes around Change Square and other parts of the capital, medics and organizers of the protests said. Among the dead were three dissident soldiers.

Twenty-six people were killed in Sanaa on Sunday, according to medics.

Protest organizers said 942 people have been wounded by gunfire in Sanaa since Sunday, with 47 in critical condition.

Four other people have been killed in the city of Taez south of Sanaa.