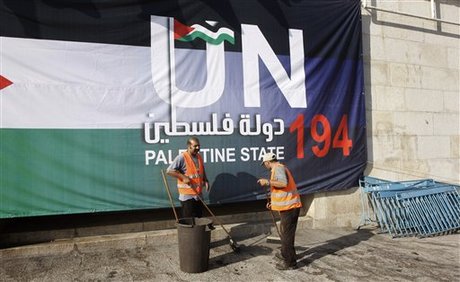 The Palestinians will not be able to secure a Security Council majority in favor of their bid to become a United Nations member state, Israel's cabinet secretary Tzvi Hauser predicted on Tuesday.

Speaking on Israeli military radio, Hauser said the Palestinians would fail to obtain the nine yes votes they need to keep alive their hopes of becoming a member state on the lines that existed before the 1967 Six Day War.

Palestinian president Mahmud Abbas, acting in his capacity as head of the Palestine Liberation Organization is expected to formally submit the membership bid to the U.N. on September 23, when he will also address the General Assembly.

"The Palestinians will change their attitude when they realize that their unilateral initiative is going nowhere and will lead them directly to stalemate," Hauser said.

"In New York we will see who is the one who refuses to extend h hand for peace and who will do it."

The Palestinians have said they believe they can win the nine yes votes needed for their membership bid to pass the Security Council, but the United States is expected to veto the request, effectively sinking it.

If Washington does veto the bid, the Palestinians are expected to then turn to the General Assembly, where they believe they will easily secure the votes needed to upgrade their representation to a non-state observer level.

Hauser said such an upgrade would "have no significance."

He said Israel continued to call on the Palestinians to drop the U.N. bid and resume negotiations, saying Israel was ready to hold talks "without preconditions, unlike the Palestinians."

On Monday, Netanyahu said he wanted to meet with Abbas in New York "to open direct negotiations... which would continue in Jerusalem and Ramallah."

"I propose to president Abbas to begin peace negotiations instead of wasting time on futile unilateral measures," he said in a statement.

Talks between the two sides have been on hold for nearly a year, grinding to a halt shortly after they began over the issue of Israeli settlement construction.

Israel has declined to renew a 10-month partial settlement freeze that expired shortly after peace talks began last year, and the Palestinians say they will not hold talks while Israel builds on land they want for their future state.

The least Palestine deserve is recognition by the UN...