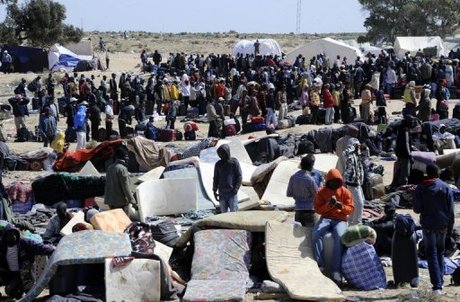 A new briefing paper issued by the rights group called on EU member states to "urgently address" the worsening situation by opening their borders to the mainly sub-Saharan refugees who were forced by the recent unrest to leave their homes.

"We have witnessed an abysmal response to the plight of displaced refugees on Europe's doorstep," said Nicolas Beger, Director of Amnesty International's European Institutions Office.

"This failure is particularly glaring given that some European countries, by participating in NATO operations in Libya, have been party to the very conflict that has been one of the main causes of the involuntary movement of people.

The paper estimates that around 5,000 refugees are currently living on Libya's Egyptian and Tunisian borders.

Rebels accuse sub-Saharan Africans of fighting for Gadhafi, and many have fled to the borders fearing revenge attacks.

Refugees from Tunisia and Egypt have also arrived at the borders following violent rebellions in their own countries.

Amnesty described the conditions at Egypt's Saloum border post and the Choucha camp in Tunisia as "grim".

The fleeing populations face harsh desert conditions and have been forced to sleep in tents made of blankets and plastic sheets.

One Sudanese refugee told Amnesty: "there is no freedom in Sudan and no dignity here."

The United States, Australia and Canada have offered to resettle some of the refugees, but only eight European countries have come forward, between them offering only 700 places, according to the paper.

"These people stranded on Libya's borders are between a rock and a hard place," said Beger. "It is time for the EU to shoulder responsibility for this crisis."

Since the conflict began, around 1,500 people are believed to have died after returning to Libya and attempting to leave the country by boat, Amnesty said.