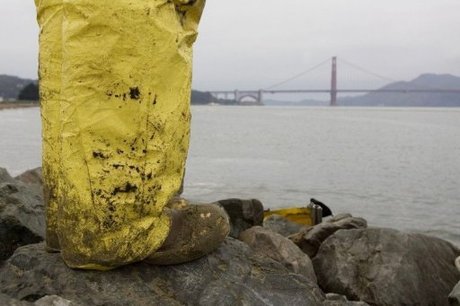 The owners and operators of a cargo ship that struck San Francisco's Bay Bridge four years ago causing a huge oil spill are to pay $44.4 million in compensation, under a deal announced Monday.

The COSCO-Busan container ship leaked 53,000 gallons of oil after colliding with the bridge on November 7, 2007, killing thousands of birds, fish and spoiling miles of shoreline habitat.

Monday's deal was announced by U.S. Secretary of the Interior Ken Salazar in a joint statement with the Justice Department, California state and San Francisco city authorities.

"This settlement is great news for the Bay Area and for all who enjoy these lands and waters rich in beauty, wildlife, and recreational opportunities," said Salazar.

The spill was the biggest oil slick to hit the region since 1996, when 10,000 gallons of fuel leaked out of a ship undergoing repairs, and spread well beyond San Francisco Bay, around 13 miles (20 kilometers) north of the Bay Bridge.

"The Cosco Busan oil spill had a major impact in the San Francisco Bay and beyond, oiling over 100 miles of shoreline," said Assistant Attorney General Ignacia S. Moreno.

"This comprehensive settlement achieves full compensation for the significant natural resources that were injured as result," she added.