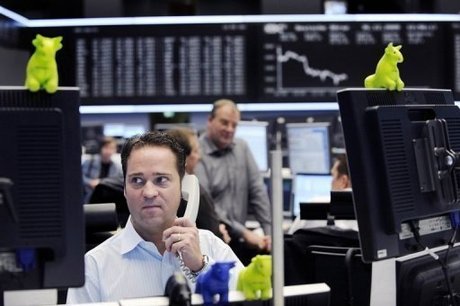 European equities and the euro fell on Wednesday on fresh concerns over banks' exposure to indebted Greece, but losses were capped by expectations of more stimulus measures from the U.S. Federal Reserve.

Banks faced fresh selling pressure, one day after the International Monetary Fund and the European Commission warned about the health of lenders exposed to Greece's debt mountain and indicated that their capital levels should be hiked.

In morning deals on Wednesday, shares in French bank BNP Paribas sank by as much as 5.48 percent, while Societe Generale shed 2.95 percent and Credit Agricole lost 0.77 percent.

Traders remain focused on debt-plagued Greece amid lingering concern that it could default, which would spark a major acceleration in the Eurozone debt crisis.

"All we've seen since the weekend is a lack of any progress and clear evidence of a fractured Eurozone," said David Morrison, analyst at trading group GFT.

"Decisions are being delayed and investors are getting worried. There is a hope that Greece's default will be delayed and orderly, but few believe it can be avoided."

Embattled Greece sought Tuesday to convince the EU and IMF that its economic program is back on track to unlock eight billion Euros in rescue funding needed to prevent running out of cash next month.

An audit had been suspended in early September, with sources citing lack of progress with reforms, placing the release of an eight-billion-euro ($11 billion) loan slice at risk.

But the commission, the EU's executive, announced after Tuesday's telephone talks that a full mission would return to Athens early next week to resume the review.

Aside from Eurozone troubles, traders are gearing up for the outcome of this week's U.S. Federal Reserve policy meeting.

The Fed is widely expected to offer up some new stimulus for the sagging American economy.

The two-day meeting of the central bank's Federal Open Market Committee might move to further press down long-term interest rates, in hopes of prodding cash-rich banks to lend and companies to invest despite gloomy economic forecasts.

But worries by some FOMC members over rising prices was expected to temper any strong moves, including a renewed "quantitative easing" program that would inject billions of dollars of liquidity into the economy.

Modest moves could disappoint markets hoping for a big move -- but would appease those fearful that the Fed could deadlock over how it should deploy its limited bag of monetary tools.

"There are nerves ahead of tonight's FOMC statement," said analyst Morrison.

"Some form of stimulus is expected, but it will have to be a real 'shock and awe' to drive equities significantly higher. That will prove difficult in the current political environment."

European stocks had rallied on Tuesday as investors brushed aside news of a sovereign debt rating downgrade for Italy and grim economic growth revisions from the International Monetary Fund.