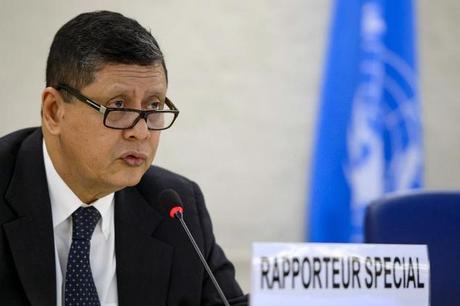 A U.N. investigator on Friday ruled out any compromise on efforts to have North Korea answer formal charges of crimes against humanity, saying holding the regime to account, including supreme leader Kim Jong-Un, is "paramount".

Marzuki Darusman, the U.N.'s special rapporteur on human rights in the North, also stressed that Kim's refusal to halt human rights atrocities instigated by previous regimes would make him legally "complicit" in such crimes.

A U.N. General Assembly is expected to vote next week on a resolution -- drafted by the EU and Japan -- that condemns rights abuses in North Korea and recommends referring its leadership to the International Criminal Court (ICC) in the Hague.

The resolution followed a comprehensive U.N. inquiry, based on the testimony of North Korean exiles, that detailed a vast network of prison camps and documented cases of torture, rape, murder and enslavement.

Pyongyang has launched a diplomatic campaign to have key provisions of the resolution scrapped, and even offered Darusman a full-fledged visit if clauses on Kim's accountability and referral to the ICC are dropped.

"At no time, more than now, is it so important to firmly keep the line," he added.

Darusman, who was on the three-member U.N. Commission of Inquiry, said the "massive" rights violations it documented included those committed before Kim came to power following the death of his father, Kim Jong-Il, in December 2011.

"But the nature of these crimes is ongoing," Darusman said.

"Having been informed of these violations, and no action being taken, renders (Kim Jong-Un) culpable of complicity in crimes against humanity," he said.

Rights abuses by North Korea have been known about for years, but the inquiry's exhaustive report carried the U.N. stamp of authority and has put Pyongyang under unprecedented pressure, which would only intensify further if the ICC were to take up the case.

It is especially sensitive to the prospect of Kim Jong-Un being personally indicted, even if he would never willingly appear before the court.

Referral to the ICC requires the approval of the UN Security Council, which China -- North Korea's main ally and diplomatic protector -- would almost certainly veto.

"It would not be a surprise," Darusman acknowledged.

"We are opposed to politicizing human rights issues or imposing pressure on other countries on the pretext of human rights," Hong said.

North Korea's recent surprise release of two jailed American citizens was widely seen as part of Pyongyang's campaign to escape the corner it has been forced into by the pending U.N. resolution.

Such "dramatic" gestures are, Darusman argued, an effort by the North to "create, perhaps, a perception that the draft resolution should not go as far as it does".

Pyongyang does have some allies at the United Nations, including Cuba which has circulated an amendment to the EU-Japan draft resolution that would delete language on referring Pyongyang to the ICC.

Another potential ally is Russia, which along with China wields a veto in the Security Council.

North Korean state media reported Friday that Kim Jong-Un was sending a close aide as a "special envoy" to Russia.

It gave no details regarding the purpose of the trip or whom the envoy might meet, but the timing would suggest it is related to the moves at the United Nations.

Last month, Australian judge Michael Kirby, who chaired the U.N. Commission of Inquiry, urged the United Nations to reject the "charm offensive" from Pyongyang and seek war crimes prosecutions for the regime.

Kirby described signs of openness as "crumbs thrown to the international community" and said tough action on North Korea should not be "traded away".