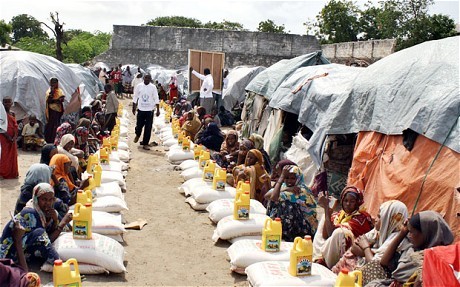 Food rations vital for half a million refugees in Kenya will be slashed in half due to an aid shortfall, the United Nations said Friday in an appeal to donors.

Most of the refugees in impoverished camps in northern Kenya come from neighboring war-torn South Sudan and Somalia.

Food rations, which include grains, pulses and cooking oil, will be cut from around 2,100 to 1,050 kilocalories per person per day.

"We're doing it to eke out the limited food we currently have available over the next 10 weeks, as we continue to appeal to the international community to assist," Turnball added.

Cuts will be made to Kenya's northeast Dadaab camp complex -- the largest in the world housing over 350,000 Somali refugees -- as well as to Kakuma camp in the northwest, home to some 125,000 refugees, including fresh arrivals fleeing South Sudan.

Rations are expected to be returned to full levels in January when fresh shipments arrive.

Special fortified foods given to children and pregnant women will remain in place for now, WFP added.

But with multiple crises around the world, including the outbreak of the Ebola virus in west Africa and war in Syria, cash from donors is severely overstretched.

"With competing humanitarian needs around the world, we realize budgets are tight but nonetheless, we must call for more funding," WFP's east and central Africa chief Valerie Guarnieri said.

In Somalia, refugees fled over two decades of conflict, while Kenya has seen a flood of South Sudan refugees following the outbreak of civil war last year.