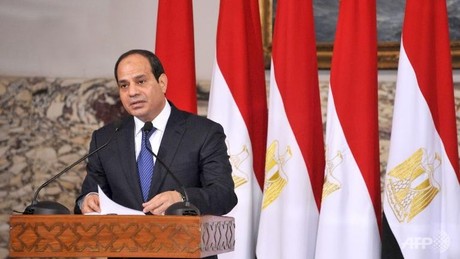 Egyptian President Abdel Fattah al-Sisi left for Rome Monday on his first European trip since ousting his Islamist predecessor and overseeing a crackdown that has killed hundreds.

Sisi is to meet Pope Francis at 1330 GMT on the first Vatican visit by an Egyptian leader in eight years, officials said.

Sisi, who was then army chief, ousted president Mohamed Morsi, the country's first freely elected leader, in July 2013, prompting a wave of deadly violence between security forces and Morsi's supporters that drew rebukes from Europe and the United States.

But boosted by its increasingly central role in combating Islamist militancy, Egypt has come in from the cold since Sisi won a presidential election in May after crushing both Islamist and secular opponents.

Officials said the four-day tour, which will also take him to France, is also aimed at securing European investment in the Egyptian economy, which has been battered by political turmoil since the Arab Spring uprising of 2011.

I like this man. He is courageous and doing good for his country

figures a Zionist thug like yourself likes a hated puppet Arab dictator who kills his people and makes peace with the terrorist Apartheid colonial Israeli state.

SISI is another Mubarak puppet dictator. He sees his people who dare to criticize him (and not just Islamists) as the enemy and not the Zionist entity, which he collaborates with. The opposition Secular and Islamist must unite and get rid of this Zionist puppet dictator.

The Pope should not have to lower himself like this. He already had to be in the same room as the Fascist Jewish Prime Minister from the rump government of Ukraine. When is too much enough. Why would he even waht such a job? This is wrong. Sisi the Democratic protester killing military Dictator of Egypt is nothing. The Pope lowers himself by allowing this wimp puppet an audience. I am disgusted