NATO Commander in Ukraine as Fighting Rumbles On 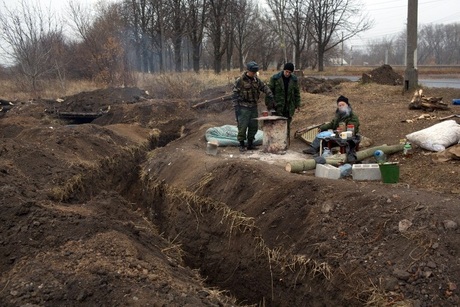 NATO's top military commander jetted into Ukraine for high-level talks on Wednesday as fighting rumbled on between government forces and Kremlin-backed rebels in the east.

Poroshenko this week mooted an eventual referendum on joining NATO and Ukraine's new pro-Western government has included a desire for membership in its official programme.

Russia is strongly opposed to the expansion of Western institutions in what it considers its backyard.

On Tuesday, Russian Deputy Foreign Minister Sergey Ryabkov said Ukraine's efforts to join NATO would "lead only to further complication of the situation".

"This will not increase security for Ukraine, it will not improve the life of the Ukrainian people," he told reporters.

Kiev argues that it needs to join NATO in order to stave off alleged aggression from Moscow, which it accuses of stirring the conflict in the east that has killed over 4,300 people since April.

Breedlove has drawn angry condemnation from the Kremlin over his repeated assertions that Russia is pouring weapons and troops across the border to support pro-Moscow insurgents controlling swathes of the east.

Ukraine's hugely divisive ambition to join NATO, however, looks unlikely to happen any time soon as secure borders and a huge overhaul to the country's ill-equipped armed forces are seen as a prerequisite.

Czech President Milos Zeman on Tuesday said that the ex-Soviet state should stay out of the U.S.-led alliance and remain "neutral".

Ahead of Wednesday's talks, Ukrainian military said that its positions had come under bombardment 47 times around the region over the past 24 hours.

The mayor's office in the rebel-held city of Donetsk said that shelling had continued unabated overnight in two outlying districts of the city, close to where Ukrainian troops are battling to keep control of the ruined airport.