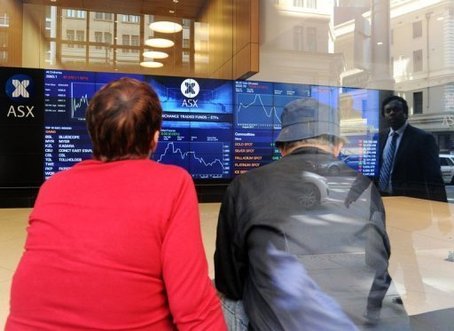 Asian markets fell for a second straight day Friday and the dollar rose amid growing fears that the global economy is on the verge of slipping back into recession.

However, most markets were off their earlier lows after G20 finance chiefs meeting in Washington promised to take collective action to stabilize the financial system.

Sydney closed 1.56 percent, or 61.7 points, lower at 3,903.2. However, the market was off its earlier lows and at one point even edged into positive territory.

Tokyo was closed for a public holiday.

The Asian sell-off followed heavy losses in the United States and Europe, which were caused by the Federal Reserve's comments on Wednesday that the U.S. economy faced "significant downside risks", with the economy struggling with slow growth, high unemployment and a depressed housing market.

The warning came after the Fed announced a $400 billion plan to boost the economy that would see it shift its shorter-term debt portfolio to longer-term bonds in a bid to lower long-term interest rates, a move that disappointed markets.

The Fed's forecast piled the pressure on already nervous investors, who were selling assets earlier in the week amid fears Greece was on the verge of default, which could spread to other economies and lead to another global financial crisis.

The dollar extended its rise against regional currencies as dealers shifted their attention away from riskier assets.

In a bid to ease global turmoil the Group of 20 major economies pledged late Thursday to mount a powerful response to the rising challenges facing the world economy.

The G20 finance ministers and central bankers vowed in an unexpected joint statement to deliver "a strong and coordinated international response to address the renewed challenges facing the global economy."

On oil markets New York's main contract, West Texas Intermediate light sweet crude for November delivery, was up 89 cents to $81.40 in afternoon trade, bouncing back from a massive 6.3 percent, or more than five-dollar, fall in the U.S. session Thursday.

Brent North Sea crude for November settlement was up $1.42 to $106.91, but the gains were narrower. The contract plunged $4.87 overnight.

The fall -- the worst in a single day since October 2008, at the beginning of the financial crisis -- sent the index to a seven-month low as foreign investors pulled out.

The currency slipped to 50 rupees against the dollar briefly, a level last seen in May 2009, before recovering to 49.09 after suspected central bank intervention.

India's leading vehicle maker Tata Motors fell 4.81 percent to 148.4 rupees amid media reports that the firm, like other auto makers, is cutting production due to slowing demand in the ongoing Indian festive season.