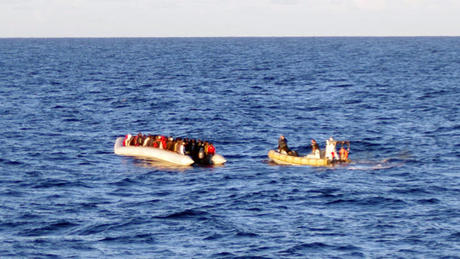 Some 700 illegal migrants rescued from a ship near the Greek island of Corfu arrived in Italy on Wednesday, after their boat was intercepted while "drifting" towards the coast.

Dozens of official cars met the migrants as they arrived in the port of Gallipoli, in the southeast of Italy, at around 0230 GMT on Wednesday morning, according to an Agence France Presse reporter on the scene.

Police and maritime authorities will investigate how the migrants, reportedly mainly from Syria and including a heavily pregnant woman, came to be hidden on the Blue Sky M as it sailed to the Croatian port of Rijeka.

The boat was boarded by Italian coastguards late on Tuesday after initially passing an inspection by the Greek navy.

"Coastguard personnel have boarded a cargo ship adrift with 700 migrants," the Italian navy said in a tweet.

A frigate, a Greek navy helicopter and two patrol vessels were dispatched to rescue the Moldovan-flagged ship after it issued a distress signal in Greek waters and reports emerged of gunmen on board.

But an inspection of the boat revealed "no (mechanical) problems and nothing suspicious on the boat," a spokeswoman for the port police told AFP.

Media have speculated that people traffickers abandoned the ship when authorities neared the boat as it crossed the Adriatic sea between Greece and Italy, but no official confirmation has been given.

The ship was allowed to continue its journey before it was intercepted by Italian coastguards, who suspected it had a cargo of illegal migrants and was heading for the coast on autopilot.

The latest safety scare in the Adriatic comes after at least 13 people were killed in a huge rescue operation to save an Italian ferry that burst into flames in stormy seas on Sunday.

Both rescue operations have had to combat strong winds and stormy conditions, according to port police.

Italy has picked up 2,300 people from troubled boats over the Christmas period, lifting to more than 170,000 the number of migrants from North Africa registered as reaching Italian soil this year.

The country has been struggling to cope this year with a massive jump in the number of migrants trying to cross the Mediterranean Sea to Europe, the majority of them from war-wracked Syria or Eritrea.

But in practice the Italian navy has continued to carry out most of the rescues despite officially scaling back its own Mare Nostrum operation at the end of October after failing to persuade other EU governments to help fund it.