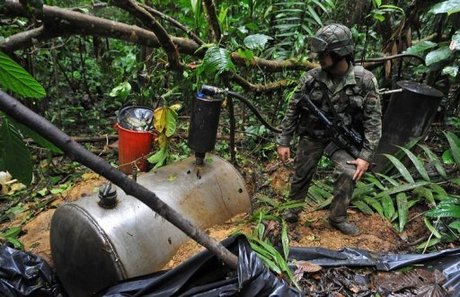 Suspected leftist guerrillas have attacked a pipeline in northeastern Colombia, the army said, in the latest assault on the country's vital oil sector.

The attack on Wednesday was believed to have been carried out by the Revolutionary Armed Forces of Colombia (FARC) or the National Liberation Army (ELN), which are active in the area, an army brigade spokesman told Agence France Presse.

The Ministry of Defense has reported more than a dozen pipeline explosions since the start of the year, as the rebels have allegedly stepped up their attacks on oil facilities, taking aim at a key source of government revenue.

A search is still underway for four Chinese workers from Emerald Energy who were kidnapped in the southern Caqueta province on June 8.

The military is currently deploying around a third of its forces, some 80,000 troops, for the protection of the country's mining and energy sector.

Colombia's oil production reached 953,000 barrels per day in August, an increase of more than 20 percent over the last year. It is now the third largest South American oil producer after Venezuela and Brazil.

The Colombian government has been battling the FARC -- Latin America's oldest rebel movement, now estimated to have some 8,000 fighters -- since 1964.