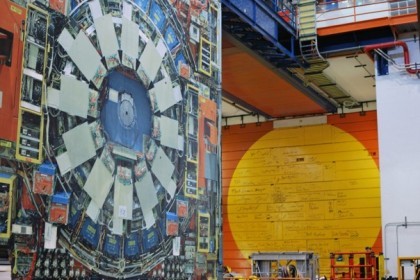 A powerful U.S. atom-smasher that was the world's biggest particle collider for nearly a quarter-century closed forever on Friday, solidifying Europe's place as the world leader in physics.

The Tevatron began its collider work in 1985, as part of the U.S. Department of Energy's Fermi National Accelerator Laboratory, and its shutdown comes at a tough time for budget-squeezed U.S. science and space programs.

Tevatron has been overtaken by a more powerful atom smasher -- the world's largest -- the Large Hadron Collider, built on the French-Swiss border by the European Center for Nuclear Research (CERN), a consortium of 20 member nations.

But in its day, the Tevatron made some major contributions, including the identification of the top quark in 1995 and the discovery in 2000 of the tau neutrino, an elusive piece of the Standard Model of Physics.

Now the only part of the Standard Model left to identify is the Higgs-Boson particle which, if it exists, is believed to give objects mass. The Tevatron helped physicists narrow down where it might be, but could not find it.

The Tevatron, which cost about $50 million per year to operate, also led to a host of more concrete advances, chief among them the widespread use of magnetic resonance imaging (MRI) machines for medical diagnosis.

A Fermilab spokeswoman said there are no layoffs directly tied to the shutdown.

"Of the 600 scientists on the Tevatron, many will continue to analyze Tevatron data for the next two years and many are moving to other Fermilab experiments," said Elizabeth Clements.

American physicists will now concentrate on more precise -- and less expensive -- questions at home and work with CERN on high-energy projects like the search for the Higgs-Boson, sometimes called the "God" particle.

The Tevatron has made "significant contributions to our understanding of the building blocks of the universe and how they work and fit together," said Pier Oddone, director of the Fermi Laboratory, at the closing ceremony.

"But while one era is now ending, another is beginning at Fermilab," he said.

"As we move forward into a post-Tevatron era, our laboratory will continue to remain at the forefront of science with our leading experiments with very intense beams of particles, strong participation in the Large Hadron Collider at CERN, and array of experiments that seek to understand dark matter, dark energy and the nature of ultra-high energy cosmic rays."

Fermilab scientists are currently building a dark energy camera, which will be able to scan the galaxy faster than any other telescope and aims to discover why the expansion of the universe is speeding up instead of slowing down.

They are also constructing the world's most powerful neutrino beam, which could help explain why the universe has more matter than antimatter and expand our understanding of its most abundant particles.

And there is Project X which -- if it secures funding -- aims to be the world's most intense proton accelerator. Construction could start in the next decade, Oddone said.