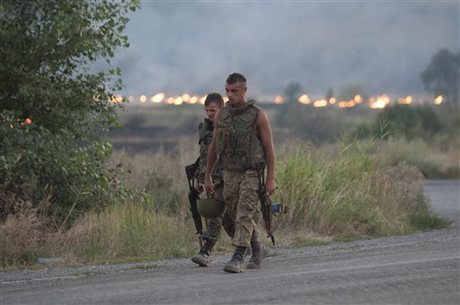 A mass call-up Monday by separatist authorities aimed at boosting their forces in east Ukraine to 100,000 fighters sparked mixed reactions from inhabitants in rebel bastion Donetsk.

While some met the call-to-arms -- which the pro-Russian rebels said was voluntary -- with jingoistic fervor, others who spoke to Agence France-Presse dismissed the plan as fantastical or said they had no intention of signing up.

"I wouldn't give it too much credence," said Alexander, 28.

"Either it's wrong or they're saying it for Ukrainian media," said the pro-separatist transport manager.

Standing with his girlfriend Yelena on his arm, Viktor Tishchenko, 41, said he was willing to volunteer after seeing the devastating impact of fierce fighting between rebels and government troops.

"The events of the last few months have led to this mobilization," he said.

"After seeing cities and houses bombed for the past six months, many people will volunteer."

Alexei and Ivan, two computer engineers in their thirties, would also agree to fight.

"Of course. You have to defend your homeland," said Alexei.

But even for these loyalists of the rebels' self-proclaimed Donetsk People's Republic, the figure of 100,000 sought by rebel chief Alexander Zakharchenko seems unfeasibly high.

"Look around," they joked, pointing at the half-deserted streets. "Where are you going to find all of them?"

"A lot of people have left or don't want to go to war," said student Daniil, 24.

For him, the idea of facing mortar and rocket fire on the frontline was difficult to stomach.

"When the time comes, I'll think about it," Daniil said. "But I am not a soldier and I don't want to become cannon fodder."

"There are two choices: either I go to fight or I leave for Russia."

While some were considering joining the rebel ranks, others said that they would be opposed to the idea.

"I would refuse to go. This is a war between brothers," said lawyer Vyacheslav, 30.

"I have friends who are pro-Russian and others who support Ukraine."

Elsewhere, web designer Vitaly said he was increasingly feeling trapped by the rebel rulers of the city.

"There is continual fighting and you can die at any time and now they announce a supposedly voluntary mobilization," he said. "It is voluntary at gunpoint. If it's for real it's nothing more than suicide."

The insurgents had announced the call-up would start in 10 days because that is the amount of time it takes to get permission from Ukrainian forces to leave the region, he claimed.

"There is no possibility to escape," he said.

"Every day, I feel a little bit more a hostage" of the separatist authorities.