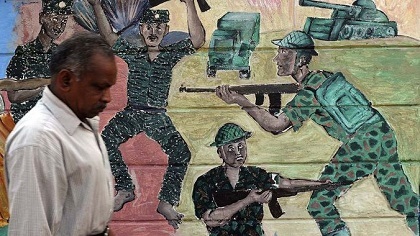 The Commonwealth on Tuesday welcomed Sri Lanka's plans to establish a "credible" inquiry into war crimes allegations, after talks with new President Maithripala Sirisena and the former British colony's other leaders.

Secretary-General Kamalesh Sharma also offered Commonwealth assistance to set up the judicial inquiry into allegations troops killed thousands of Tamil civilians during the final stages of its ethnic war.

"We have discussed options for practical Commonwealth support for these vital domestic processes, and welcome the intent to establish a credible domestic investigation mechanism that respects international humanitarian law," Sharma said at the end of a three-day visit.

Sirisena pledged during last month's election campaign to set up a probe into allegations 40,000 civilians were killed in the final push of the separatist conflict that ended in 2009.

Sirisena defeated former strongman Mahinda Rajapakse who had long resisted international pressure to conduct a probe into the allegations which are the subject of a U.N.-mandated international investigation.

Rajapakse hosted a Commonwealth summit in Colombo in November 2013 that was boycotted by several heads of state over his insistence that not one civilian was killed.

Rajapakse is credited with crushing the Tamil Tiger rebels who at the height of their power between 1990 and 1995 controlled a third of Sri Lanka's territory.

Sharma said the Commonwealth was pleased Colombo was moving to memorialize all those who died in the conflict.

"We were pleased to learn that the government is currently considering the necessary steps to address Sri Lanka's accountability and reconciliation needs," Sharma said.

The U.N. estimates that at least 100,000 people died in the war between 1972 and 2009. The previous government had not allowed ethnic minority Tamils to honor their war dead and Tamil rebel cemeteries were bulldozed after the end of the war.

The new government has promised a South African-style truth and reconciliation commission to help Tamils and ethnic majority Sinhalese come to terms with the war.