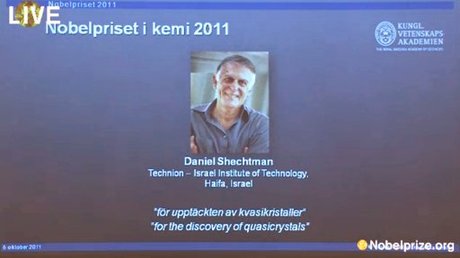 Daniel Shechtman of Israel won the 2011 Nobel Chemistry Prize Wednesday for discovering and revealing the secrets of quasicrystals, which has revolutionized the notion of solid matter.

Quasicrystals, described by the Nobel jury as "a remarkable mosaic of atoms", are patterns that are highly ordered and symmetrical but which do not repeat themselves.

To the untutored eye, they look like abstract Islamic art.

Quasicrystals have been found in the lab and some have been discovered to occur naturally in minerals.

Their closely-packed structure helps them strengthen materials, with potential outlets in consumer products such as frying pans and machines such as diesel engines which experience high heat and mechanical stress.

His discovery was "extremely controversial," the Nobel committee said, noting that the atoms were "arranged in a manner that was contrary to the laws of nature."

The Israeli was met with total opposition and even ridiculed by his colleagues, with the head of his laboratory handing him a textbook in crystallography and suggesting he read it.

He was ultimately asked to leave his research group at the U.S. National Institute of Standards and Technology.

"His battle eventually forced scientists to reconsider their conception of the very nature of matter," the jury said.

Shechtman, born in 1941, is currently a professor at Israel Institute of Technology in Haifa, where he holds the Philip Tobias Chair.

He will receive the $1.48 million award at a formal ceremony in Stockholm on December 10, the anniversary of the death of prize creator Alfred Nobel.