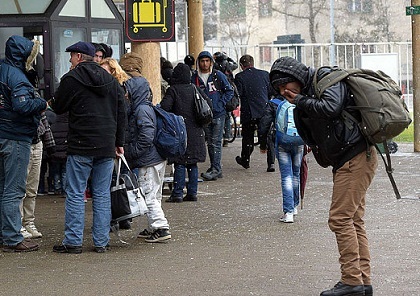 Close to 8,000 migrants, mostly from poverty stricken Kosovo, have been detained in the past six days after crossing into Hungary illegally, police said Tuesday amid a rising influx of asylum seekers.

Since the beginning of February, over 1,000 illegal immigrants have been arrested every day.

"Ninety-five percent of them are from Kosovo," a policewoman confirmed to AFP Tuesday.

Most of them cross into EU member Hungary near the southern town of Szeged, on the Serbian border. However, their final destination is rarely Hungary, but other EU countries in Western Europe.

Prime Minister Viktor Orban has repeatedly lashed out at economic migrants and his ruling Fidesz party has promised tougher measures to keep people out.

A senior Fidesz lawmaker, Antal Rogan, meanwhile said on Tuesday that immigration rules should be amended so that illegal immigrants can be kept locked up until their application has been approved or rejected.

In 2014, Hungary saw 43,000 asylum-seekers, compared to 2,200 in 2012, according to official data. In January alone, Hungary received 13,000 asylum requests, the Office of Immigration and Nationality also said.

Kosovo, where most of the population are ethnic Albanians, unilaterally proclaimed independence from Serbia in 2008.