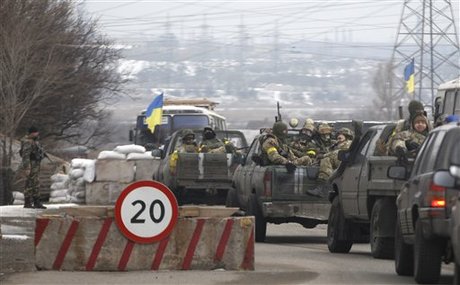 "As far as I know there are (Croatian fighters) who joined the Ukrainian army," Pusic told reporters and added that the country's intelligence services were "following the issue."

"For the time being (volunteers) they did not join paramilitary units," she added.

Pusic was commenting recent local media reports that around 20 volunteers, mostly veterans of Croatia's 1990s independence war, left the country in late January for the Ukrainian port city of Mariupol where they were to join the far-fight Azov battalion. Around a dozen Croatians were already there, the Vecernji List daily reported.

"An open Russian aggression against Ukraine, similar to the one that we have experienced in 1991 is being passed over in silence," one of Croatian fighters bound for Ukraine, identified only as Denis S., was quoted as saying by the local Internet portal.

"These people (volunteers) recognized that and that's why we are going there to help," the fighter added.

Hundreds of volunteers, including ones from Ukraine, came to fight alongside Croatian forces during the country's 1991-1995 war. During the conflict Zagreb forces fought against Belgrade-backed rebel Serbs who opposed Croatia's proclamation of independence from the former Yugoslavia.

The conflict between pro-Moscow separatists and government forces in eastern Ukraine has killed at least 5,350 people since April last year.

The leaders of France, Germany, Russia and Ukraine were to meet later on Wednesday in the Belarussian capital Minsk in the hope of agreeing a peace deal to end the fighting.