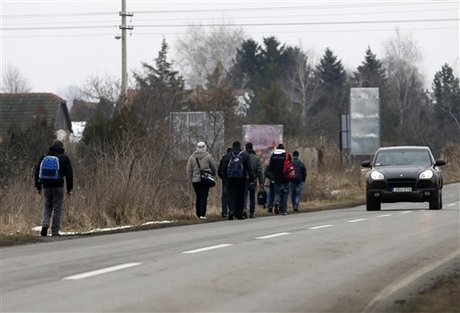 Kovoso's Interior Minister Skender Hyseni on Thursday urged the European Union to expel thousands of Kosovan nationals, who have quit their homeland in search of a better life in EU countries.

Speaking after talks with his Austrian counterpart Johanna Mikl-Leitner in Vienna,, Hyseni said: "We've always been told that the vast majority of the illegal migrants have no status rights and will be sent back. I hope that happens quickly."

The past few weeks has since an influx of impoverished Kosovo Albanians into the EU.

The migrants, who require a visa to enter the passport-free Schengen area, generally first cross into northern Serbia and then pay smugglers hefty amounts to spirit them illegally across the border into EU member Hungary.

In the same month Austria received 1,029 such requests from Kosovans.

Hyseni said the EU should act to dispel the "illusion" among migrants, nurtured by the smugglers, that they can obtain asylum in EU countries.

Mikl-Leitner said Kosovo was a safe country and that the migrants had "no chance of obtaining asylum". The minister said she hoped to speed up the asylum procedure so that unsuccessful candidates were expelled within 10 days.

Kosovo declared independence from Serbia in 2008. Around 40 per cent of the mostly ethnic Albanian population of 1.8 million people lives in dire poverty.