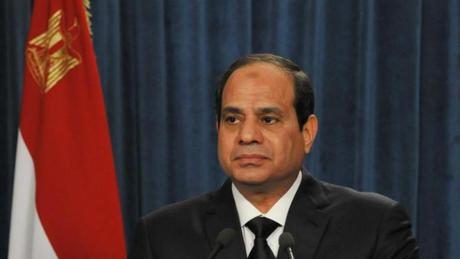 The matter will be taken up by the U.N. Security Council on Wednesday after a request by Egyptian Foreign Minister Sameh Shoukry, diplomats said.

President Abdel Fattah al-Sisi said "there is no choice" but to create a global coalition to confront the extremists in Libya, in an interview aired by France's Europe 1 radio.

Shoukry was in New York seeking backing from Security Council members for military intervention and to demand "full support" against the jihadists, a ministry spokesman said.

He will publicly lay out the situation before the council, Britain's deputy permanent representative Peter Wilson told reporters.

Asked about the demand for an intervention, Wilson said "we are waiting to see what... Shoukry has to say."

Arab diplomats have expressed support for the Egyptian request, but said they thought it would also require a formal request by the Libyan government.

But Libya currently has two rival parliaments and governments, one side with ties to Islamists and the other recognized by the international community.

The diplomatic push comes a day after Egyptian F-16s bombed militant bases in Derna and on the fourth anniversary of the beginning of the 2011 NATO-backed revolt that ousted strongman Moammar Gadhafi.

The raids were ordered hours after IS in Libya released a gruesome video showing the beheadings of 21 Coptic Christians who were in the North African country seeking work and were captured by the group.

He denounced "the ghastly attempt to justify and glorify it in a video."

Hundreds of thousands of Egyptians remain in Libya, and their government is encouraging them to leave, said foreign ministry spokesman Badr Abdelatty.

Libya has been gripped by turmoil since the revolt and Cairo officials have long said the NATO intervention to help the anti-Gadhafi rebels left Egypt to contend with chaos on its western border.

"The mission was not finished," Abdelatty said.

France, which agreed Monday to sell Egypt advanced Rafale warplanes, has called with Cairo on the U.N. to adopt measures to confront the jihadists in Libya.

Italy, the former colonial power there and located just across the Mediterranean, ruled out intervention without U.N. backing and suggested a political solution remained the best option.

"What is happening is very complicated. We are following events closely and with concern but there is no need to jump from total indifference to hysteria and an unreasonable reaction," Prime Minister Matteo Renzi said.

The European Union said it would discuss with the Egyptian and U.S. governments this week joint action on Libya, but that it saw no role in any military intervention for now.

Chaos in Libya has seen rival governments and powerful militias battling for key cities and the country's oil riches, providing fertile ground for IS.

But Egypt says it would be naive to hope for a speedy settlement, insisting militants must be confronted with force.

"There are terrorist organizations in Libya that are not abiding by their commitments; they are not serious about dialogue," said Abdelatty.

Monday's strikes were the first time Egypt announced military action against jihadist targets in Libya. Last year it reportedly allowed the United Arab Emirates to use its bases to bomb militants there.

Experts say Sisi wants to be seen as a key ally of the West against Islamist extremism, deflecting international criticism of his crackdown on the Muslim Brotherhood of former president Mohamed Morsi, whom he ousted in 2013.

As well as Libya to the west, Egypt is dealing with an insurgency in its own east, in the Sinai Peninsula, where jihadists have also joined IS and killed scores of troops.

Abdelatty said it was time for the international effort against IS -- which has been hammered by U.S.-led air strikes in Iraq and Syria -- to focus on its presence elsewhere.

"Just as there is movement against Daesh in Syria and Iraq, we want the world to turn its attention to Libya," he said, using an Arabic acronym for group.

This man is a great leader.

you have a strange definition of "great"...he just killed 5 children yesterday in Libya...alongside his other massacres in Egypt.

"he killed them in person. he just went there and killed them in cold blood"???...So the lives of those who are not killed in COLD BLOOD for political reasons are not worth anything or are worth less??? Why do those who claim that they are not targeting civilians kill more civilians? Doesn't the killing of civilians whether they are the "target" or not ALSO TERRORize people???

What about the 1000+ egyptians killed/massacred by sisi for no valid reason?

How about the Ikhwan of the FSA? Do you love them?

The EU are more than happy to provide Sisi with weapons, because he has peace with Israel, so he can fight their takfiris all he wants. But Assad being an enemy of Israel, does not receive the same treatment, fighting the exact same ISIS.

Unlike your leaders, Sissi is a great leader.