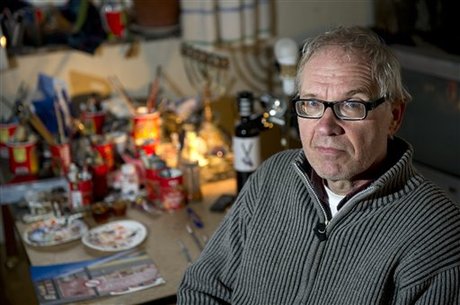 A Swedish cartoonist believed to have been the target of one of the deadly Copenhagen shootings said Tuesday that Danish police had underestimated the terrorist threat since January's Paris attacks.

"The attacker had good weapons, he had better weapons than the police," Lars Vilks, who has been forced into hiding since the weekend shootings, told AFP.

"There was an escalation since the Charlie Hebdo attacks (in Paris) and the Danes had not caught onto that," he said.

Vilks was among those attending a debate on Islam and free speech at a cultural center attacked on Saturday by a gunman who also targeted a synagogue in a rampage that left two people dead and five wounded.

The assaults came just weeks after the Paris attacks last month by Islamist gunmen on the Charlie Hebdo satirical weekly and a kosher supermarket that left 17 people dead.

"They did not step up security on Saturday. It was the same as we had previously... they must consider whether they need to be better armed," the 68-year-old cartoonist said.

Vilks, who had his own security detail at the event, emerged unharmed after the gunman fired off dozens of rounds outside the center.

But he conceded that it was "easy with hindsight" to say that the police could have done more.

Vilks -- who has faced several death threats since his cartoon portraying the Prophet Mohammed as a dog was published in a Swedish newspaper in 2007 -- has lived under police protection since 2010.

Swedish police said Monday they had moved the artist from his home in the south of the country to an undisclosed "safe" location.

Vilks said that despite the threats he intended to keep speaking out about freedom of expression.

"I have no plans to give up. But I don't know what security decisions will be made -- it could be deemed inappropriate to speak publicly. It would be tragic if that was the case, he said.

"But there can't be a military operation every time I'm going to lecture."