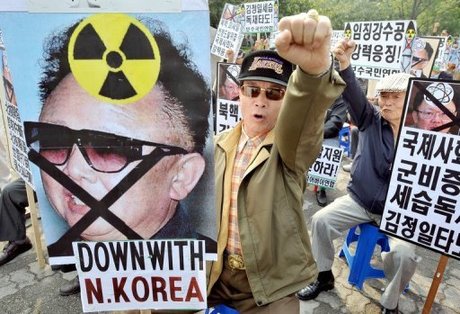 Chun Yung-Woo, senior secretary for foreign affairs and national security, said other parties in the talks would not reward the North for abandoning its "illegal" nuclear activities.

"In order for the six-party talks to resume, North Korea must show sincerity and take the required pre-steps, including a monitored shutdown of its uranium enrichment program," he told a security forum.

"North Korea claims that the six-party talks should be resumed without preconditions but it does not want to tackle the core issue -- nuclear weapons," Chun said.

The North abandoned the six-party forum in April 2009 and staged its second nuclear test a month later. It now calls for an unconditional resumption of negotiations.

But the United States and South Korea say the North must first show it is serious about the process, notably by shutting down the uranium enrichment program which could be reconfigured to make bombs.

"As a matter of principle, we have no intention to reward North Korea for its illegal nuclear weapons," Chun said.

Last month, the nuclear envoys of South and North Korea held a second meeting in as many months to try to lay the groundwork for the resumption of the six-party talks. No significant progress was reported.

U.S. and North Korean officials met separately in New York in late July, and there are media reports that another meeting is planned. The forum also includes China, Russia and Japan.

Chun denied the conservative South Korean government, which rolled back the previous liberal government's policy of engagement and reconciliation, was seeking to push the North's regime towards implosion.

"When we pursue reunification as a policy, we don't seek the North's collapse," he said, adding that the goal was to induce reform and openness.

Seoul and Washington are coordinating their stance on the six-party talks before next week's summit in Washington between the U.S. and South Korean presidents.