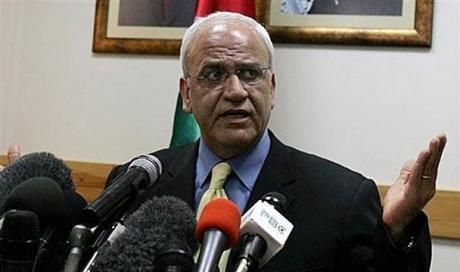 A top Palestinian official on Sunday accused Israel of trying to topple the Palestinian Authority by continuing its freeze on millions of dollars in crucial tax monies.

Speaking to Voice of Palestine radio, chief Palestinian negotiator Saeb Erakat demanded world action to pressure Israel into releasing monies owed to the Palestinian Authority which were frozen as a punitive measure nearly two months ago.

"Israel is aiming to collapse the Palestinian Authority with all its institutions, so the international community should do much more than stating what the results of such move might be," Erakat said.

"This money is not Israeli money nor donors’ money, this is an unprecedented act of piracy," he railed.

Every month, Israel transfers to the PA around $127 million in customs duties levied on goods destined for Palestinian markets that transit through Israeli ports - revenues which collectively make up around two-thirds of the Authority's annual budget, excluding foreign aid.

But on January 2, the government of Israeli Prime Minister Benjamin Netanyahu suspended the December funds as a punitive measure after the Palestinians moved to join the International Criminal Court, where they could potentially sue Israel for alleged war crimes.

The move has put huge financial pressure on the already-struggling Palestinian Authority, prompting concern within the international community.

"Israel has been doing its best to lead to the PA collapse for years, Netanyahu wants a PA without any authority and now he withholds the funds in order to make it collapse," Erakat said, demanding the international community do "much more" than merely issuing statements of condemnation.

Speaking in London on Saturday, U.S. Secretary of State John Kerry reiterated Washington's concerns over the "continued viability" of the Palestinian Authority if it did not receive the funds "soon."

"If the Palestinian Authority ceases... security cooperation (with Israel) or even decides to disband as a result of their economic predicament, and that could happen in the near future if they don’t receive additional revenues, then we would be faced with yet another crisis that could also greatly impact the security of both Palestinians and Israelis," he said.

"That would have the potential of serious ripple effects elsewhere in the region."

Under an 1994 economic agreement between the sides, Israel transfers to the PA tens of millions of dollars each month in customs duties levied on goods destined for Palestinian markets that transit through Israeli ports.

Although the sanction has been imposed many times, it has rarely lasted more than one or two months, except in 2006 when Hamas won a landslide victory in Palestinian legislative elections.

The Palestinian Authority will collapse even quicker if Israel cuts off the electricity and other facilities the PA has received over the years from Israel and has refused to pay for them.