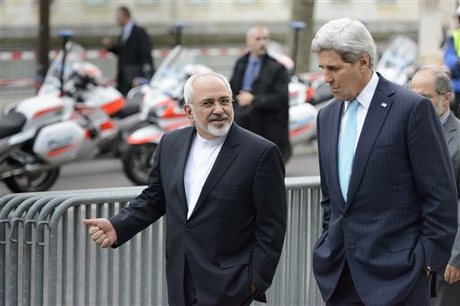 The United States and Iran said Monday they had made some progress in the latest round of talks on Tehran's nuclear program, but warned there was still a long way to go to reach a final deal.

Negotiators for Iran and six world powers have held a range of meetings in Geneva since Friday, and plan further talks in the city next week, a senior U.S. administration official said.

"These were serious, useful and constructive discussions," the official said after U.S. Secretary of State John Kerry and his Iranian Foreign Minister Mohammad Javad Zarif and his U.S. counterpart wrapped up two days of meetings in the a gray and rainy Swiss city.

"We have made some progress, but we still have a long way to go," added the official, who asked not to be identified.

Zarif agreed. "Some progress was made on certain subjects, but there is still a long road ahead to reach a final agreement," Iranian media quoted him as saying after the latest round of talks.

Speaking in Washington, White House spokesman Josh Earnest said the odds of reaching a deal were "50/50 at best".

"I think that is -- continues to be a fair assessment of where things stand," he said, adding any deal would hinge on the willingness of Iranian hardliners "to move forward with an agreement that would resolve the international community's concerns with their nuclear program."

The so-called P5+1 group of Britain, China, France, Russia, the United States and Germany are trying to strike an accord with Iran that would prevent Tehran from developing a nuclear bomb. The West would, in return, ease the punishing sanctions it imposed on Tehran over its nuclear program, which Iran insists is purely civilian in nature.

Tortuous negotiations over the controversy have poisoned relations between Iran and the West for years. However, there is now a heightened sense of urgency as the clock ticks down towards a March 31 deadline to agree on a political framework for the deal.

"We all feel the pressure, no doubt about it, but that doesn't mean that it will make us rush to an agreement that does not fulfill the (U.S.) objectives," the senior official said.

The goal, the official stressed, was to "ensure that Iran does not acquire a nuclear weapon. That objective has to be met."

While the political aspects of the agreement must be nailed down by the end of next month, the deadline for signing the full agreement is June 30 -- a cut-off point that looms all the larger after two previous deadlines were missed.

Tehran has voiced unhappiness with the separation of the political and technical aspects.

"We won't have a two-stage deal," said deputy foreign minister Abbas Araghchi, who is scheduled to meet Yukiya Amano, the head of the International Atomic Energy Agency, in Vienna Tuesday.

The talks are the latest in a string of meetings between Kerry and Zarif aimed at closing off a long-awaited deal.

The next round of negotiations, which is scheduled to kick off Monday in or near Geneva, will be at the political director level, the U.S. official said.

Zarif is scheduled to address the U.N. Human Rights Council in Geneva that day, sparking speculation he might combine the trip with further talks with Kerry.

In a sign of the growing push for an accord, U.S. Energy Secretary Ernest Moniz took part in the talks for the first time, as did Ali Akbar Salehi, the director of the Iranian Atomic Energy Organization.

Observers have suggested their participation could be a sign a deal is within reach.

But Kerry played down the importance of adding new negotiators to the mix, saying Moniz was present because of the "technical" nature of the discussions.

Ahead of the talks, Kerry also warned 'significant gaps" remained, and that U.S. President Barack Obama had "no inclination whatsoever to extend these talks beyond the period that has been set out."

"Both sides are trying to reduce expectations, but there are also signs that usually only come towards the end of negotiations," said Trita Parsi, president of the National Iranian American Council.

"You usually don't threaten to walk away from the talks, as Kerry has, until the last phases of a negotiation, for insurance. Paradoxically, it could be a sign that they're very close," Parsi told Agence France-Presse.

A key stumbling block in any final deal is thought to be the amount of uranium Iran would be allowed to enrich, and the number and type of centrifuges Tehran can retain.

Under an interim deal reached in November 2013, Iran's stock of fissile material has been diluted from 20 percent enriched uranium to five percent in exchange for limited sanctions relief.

Experts say such measures diminished Iran's ability to make an atomic weapon, which Tehran denies pursuing in the first place.

This is a joke- you cannot trust Iran. I cannot believe how naive Kerry and Obama are.