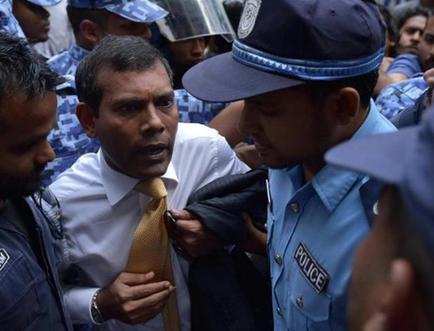 Nasheed, who was ousted three years ago, was denied bail in a brief hearing Monday after being arrested on what critics have labelled "trumped-up charges" designed to shut down growing opposition to the government of President Abdulla Yameen.

Police hauled the former leader into the court in the capital Male, ignoring his plea to be allowed to walk in himself.

Nasheed told the court that his arm hurt after police violently pushed him to the ground, but the three-judge bench brushed aside his complaints, only asking police to grant him "necessary treatment" after the hearing.

Instead of taking him to hospital in Male, however, Nasheed was seen being taken away by boat to the nearby prison islet of Dhoonidhoo. His shirt buttons were missing and he looked to be in pain throughout the hearing.

Regional power India expressed concern over the "arrest and manhandling", with the foreign ministry in Delhi urging "all concerned to calm the situation and resolve their differences within the constitutional and legal framework of Maldives".

US Assistant Secretary of State for South and Central Asia Nisha Biswal also voiced concern over Nasheed's arrest when she spoke to the Maldivian foreign minister on the weekend, a State Department spokeswoman said.

"She (Biswal) urged the government to take steps to restore confidence in...  their commitment to democracy, judicial independence, and rule of law, including respect for the right to peaceful protest and respect for due process," spokeswoman Jen Psaki said.

The charges, which carry a maximum penalty of more than 10 years in prison, relate to the January 2012 arrest of then-criminal court chief judge Abdullah Mohamed, when Nasheed was still president.

He resigned as the Maldives' leader the following month, after a mutiny by police and troops that followed weeks of protests over Mohamed's arrest on corruption allegations.

Since stepping down, Nasheed has been plagued with court action over the 2012 saga, with the most recent arrest coming just days after the state prosecutor dropped charges of abuse of power against him.

His Maldivian Democratic Party (NDP) has argued that the "trumped-up charges of terrorism" are aimed at cracking down on the opposition before a planned protest rally on Friday.

Nasheed's lawyer, meanwhile, said the charges against him were "blatantly politically motivated" and condemned authorities for refusing him legal access.

The MDP, which said it could not expect a fair trial, said Nasheed had been told that his lawyers should have registered to represent him two days before Monday's hearing -- even though he was only arrested and charged on Sunday.

State prosecutors also pressed the court to deny Nasheed bail in relation to the current case after he took refuge at the Indian embassy to avoid arrest in 2013.

The authorities have yet to issue a comment on the arrest and the subsequent court proceedings.

Hundreds of MDP activists took to the streets shouting anti-government slogans after Nasheed, who was chosen as the country's first democratically elected president in 2008, was arrested.

The Maldives is a major tourist attraction, but political unrest has dented its image as a peaceful island paradise in recent years -- particularly since Nasheed's ousting in what he described as a coup.

Yameen came to power in November 2013 after an election that Nasheed initially led before losing in a controversial run-off.

The next presidential election is not due until late 2018, but the opposition has been staging regular anti-government demonstrations in Male.