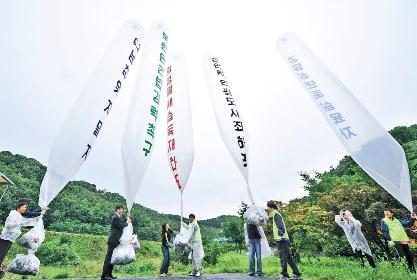 North Korea's military on Saturday threatened retaliation against "provocative" acts from the South including the scattering of anti-Pyongyang propaganda leaflets across the border.

The warning came as activists in South Korea opposed to the secretive regime plan to float balloons carrying the leaflets across the border in time for the 66th anniversary of the North's ruling communist party inauguration on Monday.

"The north side reminds the south side once again that the army and people of the DPRK (North Korea) are compelled to make a physical retaliation against the south side's ceaseless provocative war moves," a statement released by Pyongyang's official Korean Central News Agency said Saturday.

The warning was served by the head of the north's delegation to the inter-Korean general-level military talks, KCNA added.

"The reckless actions of the anti-DPRK confrontation elements to slander the headquarters of our revolution and the socialist system have reached an intolerable phase," the statement said.

It also accused South Korean warships of trespassing into the North's waters in the Yellow Sea -- more than 80 times in September alone.

The disputed sea border in the Yellow Sea has been a flashpoint where bloody naval clashes erupted between the two sides in 1999 and 2002 and navies of the two sides exchanged fire in 2009.

A week earlier, North Korea blasted the South for broadcasting propaganda on loud speakers across the border, warning of "merciless punishment" by the army against if the campaign persisted.

The North has frequently threatened to open fire across the border at sites where South Korean activists launch anti-Pyongyang leaflets, DVDs and small radios.

The two sides agreed in 2004 to halt state-level cross-border propaganda.

The South's defense ministry declines to comment on military psychological operations, saying they are confidential.

But the South resumed "Voice of Freedom" broadcasts after accusing the North of torpedoing a warship in March 2010 with the loss of 46 lives.

Leaflet launches by the South's military ended in 2000 when ties improved but were also restarted after the North shelled a border island last November and killed four South Koreans.

Private groups of activists and defectors also launch their own leaflets and DVDs, which criticise the North's regime and leader Kim Jong-Il and call for an Arab-style uprising.