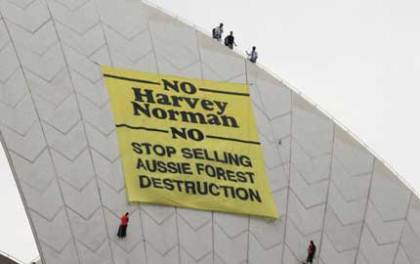 Three people scaled Sydney's iconic Opera House on Saturday, unfurling a bright yellow banner on its tiled white sails to protest against the destruction of forests.

Police said four people were arrested after the protest and were in custody.

"One woman was arrested on the ground after allegedly refusing directions to leave the area by security officers," New South Wales police said in a statement. "Two women and a man climbed the structure."

The protesters climbed onto the Opera House early Saturday in front of hundreds of onlookers, releasing a banner that read: 'No Harvey Norman. No. Stop Selling Aussie Forest Destruction".

Environmental activists from the group The Last Stand said the protest was aimed at drawing attention to retailing giant Harvey Norman -- a popular chain store that sells furniture and electrical goods.

"We are focusing on Harvey Norman and the role they play in helping to drive forest destruction here and overseas by selling products in their stores that are sourced from native forests," group spokeswoman Ula Majewski said.

Majewski said while Harvey Norman also sold products made from sustainable timber plantations and recycled wood, they were a big enough player in the market to do more.

"We just think that as the retail giant that they are, they can play a really important role in transforming the market," she told AFP from the Opera House forecourt.

"And we are just asking them to show some real environmental leadership."

Harvey Norman has previously said it has been unfairly targeted and did its best to use timber from sustainable sources.