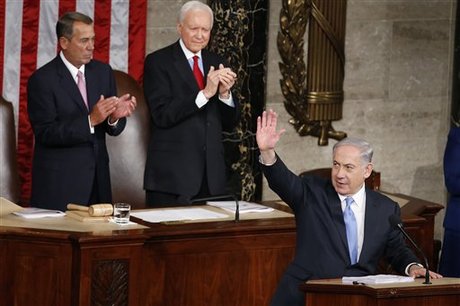 Israeli Prime Minister Benjamin Netanyahu did not forget to blast Hizbullah during his anti-Iran speech before the U.S. Congress on Tuesday, describing the Lebanese party and Tehran as a real threat to Israel's survival.

“For those who believe that Iran threatens the Jewish state, but not the Jewish people, listen to (Sayyed) Hassan Nasrallah, the leader of Hizbullah, Iran's chief terrorist proxy. He said: If all the Jews gather in Israel, it will save us the trouble of chasing them down around the world,” Netanyahu said.

“Iran's goons in Gaza, its lackeys in Lebanon, its revolutionary guards on the Golan Heights are clutching Israel with three tentacles of terror,” he added, in an impassioned address to the U.S. legislature.

“Imad Mughniyeh is the terrorist mastermind who spilled more American blood than any other terrorist besides Osama bin Laden,” the Israeli PM added.

“If Iran's aggression is left unchecked, more will surely follow,” Netanyahu cautioned, calling on the international community to “stand together to stop Iran's march of conquest, subjugation and terror.”

Netanyahu's controversial address to the U.S. Congress sought to highlight Iran's perceived expansionist hopes as one reason to halt nuclear talks between Tehran and the world powers.

Iran, a Shiite Muslim nation, is blamed for helping to prop up Syrian President Bashar Assad, for supporting Huthi Shiite rebels who have seized the Yemeni capital and for trying to influence Iraqi leaders.

hizbushaitan will pay the price of the US/iran deal :)

"If all the Jews gather in Israel, it will save us the trouble of chasing them down around the world." Another made up lie, by Netanyahu aka Bibi, Sayed Hassan never said such a thing. Zionists should indeed be chased around the world, not normal Jewish people.

Remember many jews are actually against the Zionist State of Israel.
'Israel' is still a stolen occupied land, no matter how much the World powers tries to ignore it.

Ya Netanyahu(Bibi) the state you zionists have created, is not even more than a 100 years old. Israel was a failed state, as soon as it was founded. Heroes like Hajj Radwan r.a made sure you zionists remembered that.

You better remember the sirens of 2006, people inside ISrael sure does remember. You fled like fools in that stand off, you came to eradicate the Resistance, you left within a month. Now you use pathetic takfiris to defend the occupied Golan Heights.

Netanyahu is an extremist, a criminal and liar. Nothing new. But those US congress men and women that stayed to watch him reminded me of some Syrian or North Korean gathering welcoming their supreme leader!

Please stop the accusations against fellow Lebanese who are representing a large portion of our country's citizens. Show some patriotism and stop falling into the Israeli "divide and rule" trap.

unfortunately, your poor English stands in the way of comprehending world events.

Wrong Gabby. Nasrallah is Lebanese and represents a large portion of Lebanese citizens. You cannot compare him to Netenyahu.
I do not agree with Nasrallah's view of the world or his policies or his unilateral use of violence but he is a fellow citizen.
I disagree with him within Lebanon but when it comes to choosing between him and any foreigner, that is very easy. I am pro-Lebanese at any time.

that statement is flawed as nasrallah takes his orders from iran and not from Lebanon.

You might be right but he is still Lebanese. Saad Hariri takes his orders from Saudi too. I can criticize both Nasrallah and Hariri for this but that does not mean that I will ever choose a foreign power over my fellow citizen.