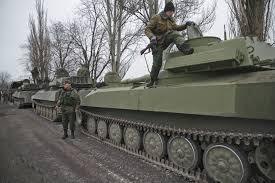 Pro-Russian rebels in eastern Ukraine claimed Saturday to have completed their withdrawal of heavy weapons, in line with a February ceasefire deal.

"Today is the last day of the weapons withdrawal," Eduard Basurin, one of the rebel leaders told reporters in the town of Snizhne, where the separatists presented eight 120mm mortars removed from the frontline.

Six international monitors were present at the scene.

"We have fully removed heavy weapons from the line of contact," Alexander Zakharchenko, the head of the self-proclaimed Donetsk People's Republic, told the separatist news agency DAN.

"Ukraine has not yet done it," Zakharchenko added, accusing government forces of failing to live up to their commitment to also remove artillery in order to create a buffer zone of between 50 and 140 kilometers (31 and 87 miles), depending on the range of the arms.