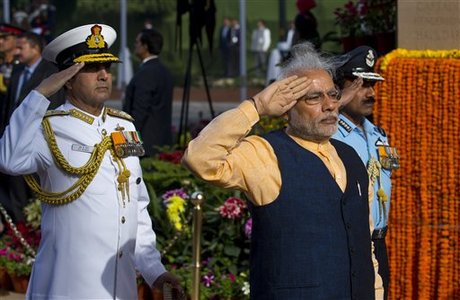 India's Prime Minister Narendra Modi embarked Tuesday on a three-nation tour of Indian Ocean islands, including a visit to neighboring Sri Lanka aimed at reinvigorating ties with the new government.

Modi's first stop will be the Seychelles followed by Mauritius and then Sri Lanka on Friday, where he will travel to the war-torn Tamil heartland of Jaffna, becoming only the second foreign leader to visit the region.

The visit comes a month after Sri Lanka's new President Maithripala Sirisena made his first foreign trip in office to New Delhi to rebuild ties hit by tensions over growing Chinese influence on the strategically located island.

Modi will also be the second senior foreign dignitary after Pope Francis to meet Sirisena in Sri Lanka following his electoral win in January.

China, which has been locked in territorial disputes with many of its neighbors, has built highways, power plants and seaports in all the three countries that Modi is visiting.