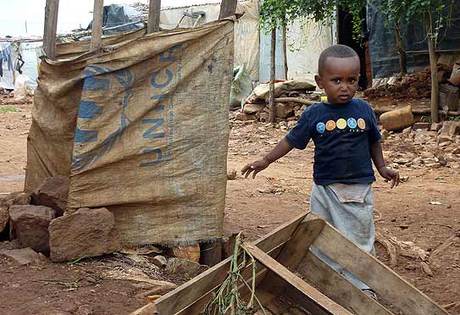 Eritrea's government is using the country's stand-off with arch-foe Ethiopia as a "pretext" to commit a litany of rights violations and ruthlessly repress opposition, United Nations investigators said Monday.

Eritrea is using the unfinished so-called "no war, no peace" state with Ethiopia to justify curtailing "most freedoms, from movement to expression, from religion to association," investigator Michael Smith told the U.N. Human Rights Council.

Smith heads up a special commission created by the council last June to probe a range of abuses in the autocratic Horn of Africa state, which declared independence from Ethiopia in 1993.

The government, he said, uses extra-judicial executions, enforced disappearances and incommunicado detentions to silence all perceived critics and to serve as a warning to others.

To maintain the system, the iron-grip regime of President Issaias Afeworki uses "pervasive state control and ruthless repression," he said.

This has sparked a massive exodus from Eritrea, which after Syria is the second largest source of migrants risking their lives to cross the Mediterranean to get to Europe.

"Most Eritreans have no hope for their future," Smith said, pointing out that "there is no rule of law in the country, and no one is being held accountable for violating the rights of groups or individuals."

Eritrean representative Tesfamicael Gerahtu rejected the commission's findings, insisting they had nothing to do with the reality in his country.

"There is no gross and systematic violation of human rights in Eritrea," he told the council.

The U.N. team of three investigators have not been given access to Eritrea, but through oral and written testimony from more than 500 Eritreans in exile said they had found "very clear patterns of human rights violations."

The commission was especially critical of Eritrea's system of open-ended conscription of all men and women at the age of 17, with pay of "a maximum of $2 (1.89 euros) a day."

"On such wages, they struggle to fulfill their basic needs, let alone think about raising a family," Smith said.

He described an Orwellian society, where the "network of spies goes so deep in the fabric of social life that a man employed by national security might not know that his daughter is similarly employed."

He said that detention was "an ordinary fact of life experienced by an inordinate number of individuals, men, and women, old and young, including children."

Detention centers include the "official and unofficial, above ground and underground, metal containers in forbidding heat or mere fences with no shelter for inmates in punishing cold," he added.

While noting that Eritrea had recently ratified the U.N. Convention against Torture, Smith pointed out that torture remains widespread in detention, "to extract a confession or to simply punish behaviors."